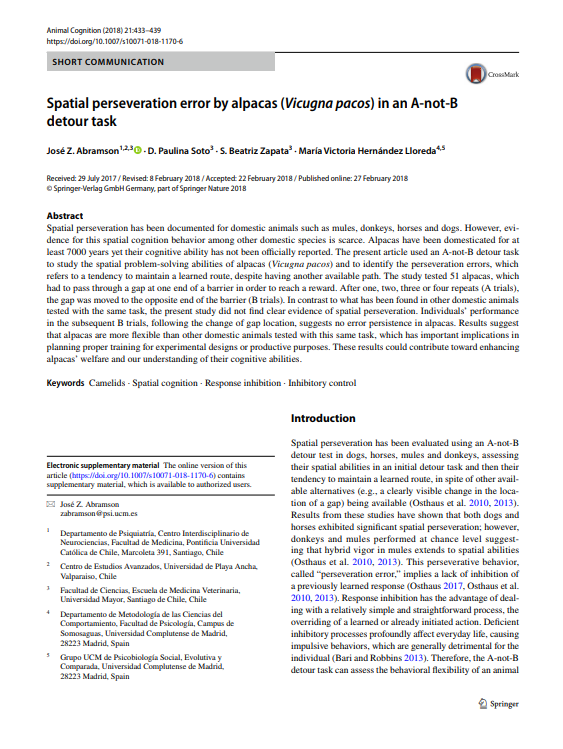 Spatial perseveration has been documented for domestic animals such as mules, donkeys, horses and dogs. However, evidence for this spatial cognition behavior among other domestic species is scarce. Alpacas have been domesticated for at least 7000 years yet their cognitive ability has not been officially reported. The present article used an A-not-B detour task to study the spatial problem-solving abilities of alpacas (Vicugna pacos) and to identify the perseveration errors, which refers to a tendency to maintain a learned route, despite having another available path. The study tested 51 alpacas, which had to pass through a gap at one end of a barrier in order to reach a reward. After one, two, three or four repeats (A trials), the gap was moved to the opposite end of the barrier (B trials). In contrast to what has been found in other domestic animals tested with the same task, the present study did not find clear evidence of spatial perseveration. Individuals’ performance in the subsequent B trials, following the change of gap location, suggests no error persistence in alpacas. Results suggest that alpacas are more flexible than other domestic animals tested with this same task, which has important implications in planning proper training for experimental designs or productive purposes. These results could contribute toward enhancing alpacas’ welfare and our understanding of their cognitive abilities.