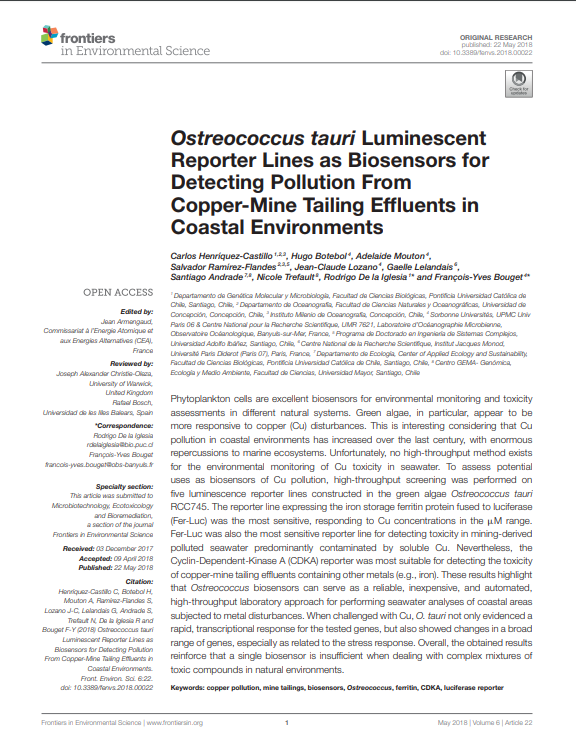 Phytoplankton cells are excellent biosensors for environmental monitoring and toxicity assessments in different natural systems. Green algae, in particular, appear to be more responsive to copper (Cu) disturbances. This is interesting considering that Cu pollution in coastal environments has increased over the last century, with enormous repercussions to marine ecosystems. Unfortunately, no high-throughput method exists for the environmental monitoring of Cu toxicity in seawater. To assess potential uses as biosensors of Cu pollution, high-throughput screening was performed on five luminescence reporter lines constructed in the green algae Ostreococcus tauri RCC745. The reporter line expressing the iron storage ferritin protein fused to luciferase (Fer-Luc) was the most sensitive, responding to Cu concentrations in the μM range. Fer-Luc was also the most sensitive reporter line for detecting toxicity in mining-derived polluted seawater predominantly contaminated by soluble Cu. Nevertheless, the Cyclin-Dependent-Kinase A (CDKA) reporter was most suitable for detecting the toxicity of copper-mine tailing effluents containing other metals (e.g., iron). These results highlight that Ostreococcus biosensors can serve as a reliable, inexpensive, and automated, high-throughput laboratory approach for performing seawater analyses of coastal areas subjected to metal disturbances. When challenged with Cu, O. tauri not only evidenced a rapid, transcriptional response for the tested genes, but also showed changes in a broad range of genes, especially as related to the stress response. Overall, the obtained results reinforce that a single biosensor is insufficient when dealing with complex mixtures of toxic compounds in natural environments.