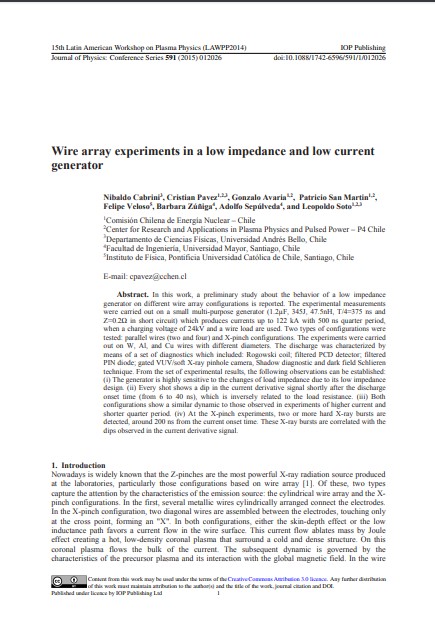 In this work, a preliminary study about the behavior of a low impedance generator on different wire array configurations is reported. The experimental measurements were carried out on a small multi-purpose generator (1.2μF, 345J, 47.5nH, T/4 = 375 ns and Z = 0.2Ω in short circuit) which produces currents up to 122 kA with 500 ns quarter period, when a charging voltage of 24kV and a wire load are used. Two types of configurations were tested: parallel wires (two and four) and X-pinch configurations. The experiments were carried out on W, Al, and Cu wires with different diameters. The discharge was characterized by means of a set of diagnostics which included: Rogowski coil; filtered PCD detector; filtered PIN diode; gated VUV/soft X-ray pinhole camera, Shadow diagnostic and dark field Schlieren technique. From the set of experimental results, the following observations can be established: (i) The generator is highly sensitive to the changes of load impedance due to its low impedance design. (ii) Every shot shows a dip in the current derivative signal shortly after the discharge onset time (from 6 to 40 ns), which is inversely related to the load resistance. (iii) Both configurations show a similar dynamic to those observed in experiments of higher current and shorter quarter period. (iv) At the X-pinch experiments, two or more hard X-ray bursts are detected, around 200 ns from the current onset time. These X-ray bursts are correlated with the dips observed in the current derivative signal.