Employment and Wages in the Places Left Behind 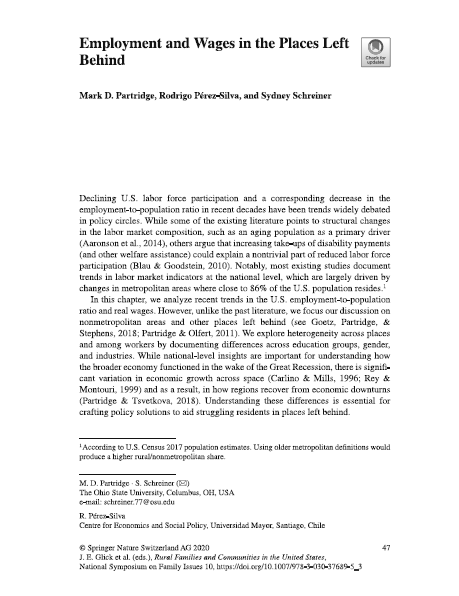 In recent decades, labor force participation across the United States has declined but the reasons remain unclear. While some point to structural changes in the labor market composition as the driving factor, others argue that increases in the take-up of welfare and disability payments are to blame. Most existing studies document trends driven by labor market performance in major metropolitan areas. In this chapter, we analyze recent trends in the employment-to-population ratio and real wages, focusing instead on nonmetropolitan areas—the places left behind. Nonmetro areas have not recovered as quickly as metro areas have from the Great Recession. Less-educated workers in nonmetro areas employed in the manufacturing sector have fared the worst in terms of real wages. Overall, our results suggest that the decline in labor force participation rates in rural areas can be explained by a relative reduction in productivity rather than changes in welfare take-up.