Regulation of Cellular Calcium, for Control of Motility and Reduction of Mortality of Bovine Sperm 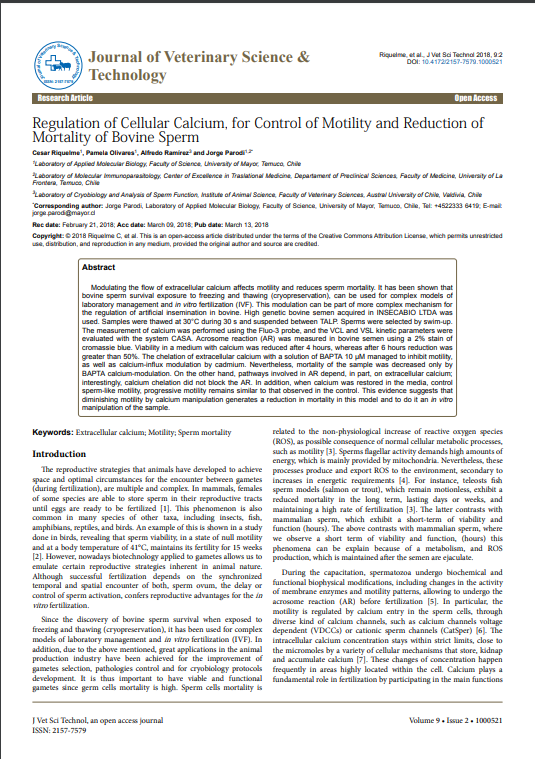 Modulating the flow of extracellular calcium affects motility and reduces sperm mortality. It has been shown that bovine sperm survival exposure to freezing and thawing (cryopreservation), can be used for complex models of laboratory management and in vitro fertilization (IVF). This modulation can be part of more complex mechanism for the regulation of artificial insemination in bovine. High genetic bovine semen acquired in INSECABIO LTDA was used. Samples were thawed at 30°C during 30 s and suspended between TALP. Sperms were selected by swim-up. The measurement of calcium was performed using the Fluo-3 probe, and the VCL and VSL kinetic parameters were evaluated with the system CASA. Acrosome reaction (AR) was measured in bovine semen using a 2% stain of cromassie blue. Viability in a medium with calcium was reduced after 4 hours, whereas after 6 hours reduction was greater than 50%. The chelation of extracellular calcium with a solution of BAPTA 10 μM managed to inhibit motility, as well as calcium-influx modulation by cadmium. Nevertheless, mortality of the sample was decreased only by BAPTA calcium-modulation. On the other hand, pathways involved in AR depend, in part, on extracellular calcium; interestingly, calcium chelation did not block the AR. In addition, when calcium was restored in the media, control sperm-like motility, progressive motility remains similar to that observed in the control. This evidence suggests that diminishing motility by calcium manipulation generates a reduction in mortality in this model and to do it an in vitro manipulation of the sample.