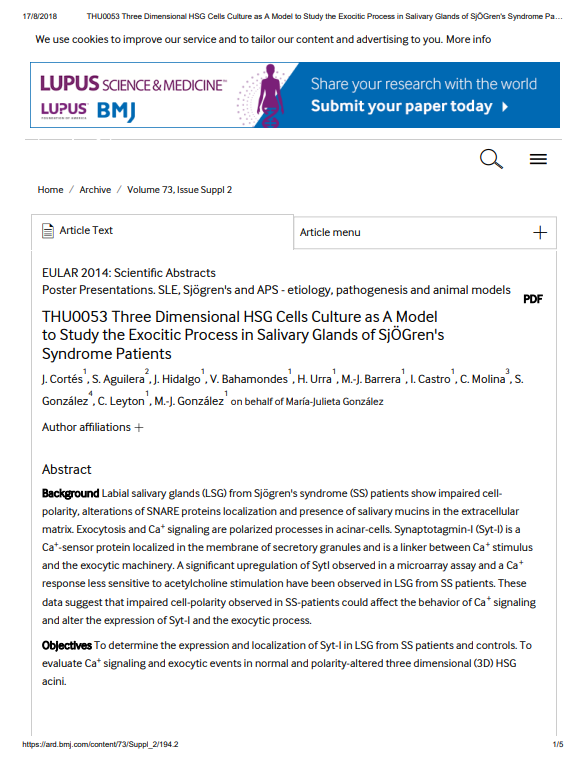 Background Labial salivary glands (LSG) from Sjögren's syndrome (SS) patients show impaired cell-polarity, alterations of SNARE proteins localization and presence of salivary mucins in the extracellular matrix. Exocytosis and Ca+ signaling are polarized processes in acinar-cells. Synaptotagmin-I (Syt-I) is a Ca+-sensor protein localized in the membrane of secretory granules and is a linker between Ca+ stimulus and the exocytic machinery. A significant upregulation of SytI observed in a microarray assay and a Ca+ response less sensitive to acetylcholine stimulation have been observed in LSG from SS patients. These data suggest that impaired cell-polarity observed in SS-patients could affect the behavior of Ca+ signaling and alter the expression of Syt-I and the exocytic process. Objectives To determine the expression and localization of Syt-I in LSG from SS patients and controls. To evaluate Ca+ signaling and exocytic events in normal and polarity-altered three dimensional (3D) HSG acini. Methods LSG were obtained from 22 healthy controls and 28 SS patients selected according to the American/European classification criteria (2002). Syt-I mRNA and protein levels were determined in protein extracts of LSG by qPCR and Western blotting, respectively. Syt-I localization was addressed by immunofluorescence and confocal microscopy. To evaluate the formation of SDS-resistant SNARE complexes, some aliquots of proteins were maintained at 25°C and other aliquots were boiled for 3 min at 100°C to disassemble SNARE complexes. Ca+ signaling was measured in 3D HSG acini obtained by culturing HSG cells on basal lamina extract. 3D acini like structures were treated with the a6 integrin blocking antibody (GoH3) that alters cell polarity. Ca+ measurements were performed with fluorescent dyes sensitive to changes of Ca+ concentration upon carbachol and isoproterenol stimulation. Exocytosis events were measured by FM 1-43 fluorescence and carbon fiber amperometry. Results LSG of SS-patients showed a significant increase of mRNA and protein levels of Syt-I. An increased Syt-I staining intensity co-localizing with STX4 mainly in the basal pole was also observed in LSG of SS-patients. An increased amount of Syt-I was observed in pre-formed SNARE complexes of LSG extracts from SS-patients. Ca+ signaling and exocytic events were dependent on extracellular Ca+ and acinar cell-polarity in 3D HSG acini. Conclusions Altered distribution of SNARE complexes and increased Syt-I levels in LSG from SS-patients might indicate Ca+ signaling alterations. These alterations could explain altered polarized exocytosis and the presence of salivary mucins in the extracellular matrix of LSG from SS-patients. We demonstrate that 3D HSG acini are useful to evaluate the effects of disrupting Ca+ signaling and Syt-I over-expression on exocytosis, as a model to explain observations in LSG from SS-patients.