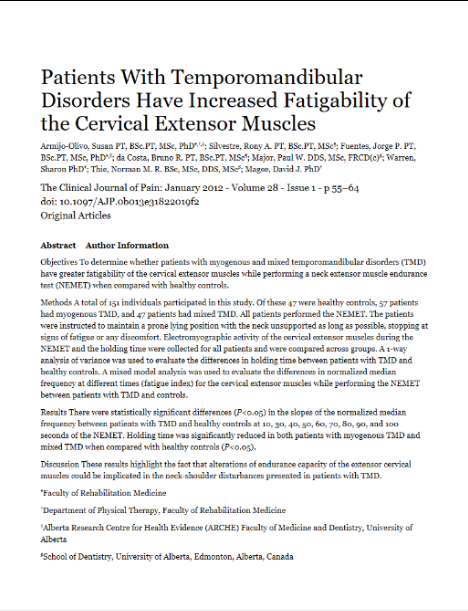 OBJECTIVES: To determine whether patients with myogenous and mixed temporomandibular disorders (TMD) have greater fatigability of the cervical extensor muscles while performing a neck extensor muscle endurance test (NEMET) when compared with healthy controls. METHODS: A total of 151 individuals participated in this study. Of these 47 were healthy controls, 57 patients had myogenous TMD, and 47 patients had mixed TMD. All patients performed the NEMET. The patients were instructed to maintain a prone lying position with the neck unsupported as long as possible, stopping at signs of fatigue or any discomfort. Electromyographic activity of the cervical extensor muscles during the NEMET and the holding time were collected for all patients and were compared across groups. A 1-way analysis of variance was used to evaluate the differences in holding time between patients with TMD and healthy controls. A mixed model analysis was used to evaluate the differences in normalized median frequency at different times (fatigue index) for the cervical extensor muscles while performing the NEMET between patients with TMD and controls. RESULTS: There were statistically significant differences (P<0.05) in the slopes of the normalized median frequency between patients with TMD and healthy controls at 10, 30, 40, 50, 60, 70, 80, 90, and 100 seconds of the NEMET. Holding time was significantly reduced in both patients with myogenous TMD and mixed TMD when compared with healthy controls (P<0.05). DISCUSSION: These results highlight the fact that alterations of endurance capacity of the extensor cervical muscles could be implicated in the neck-shoulder disturbances presented in patients with TMD.