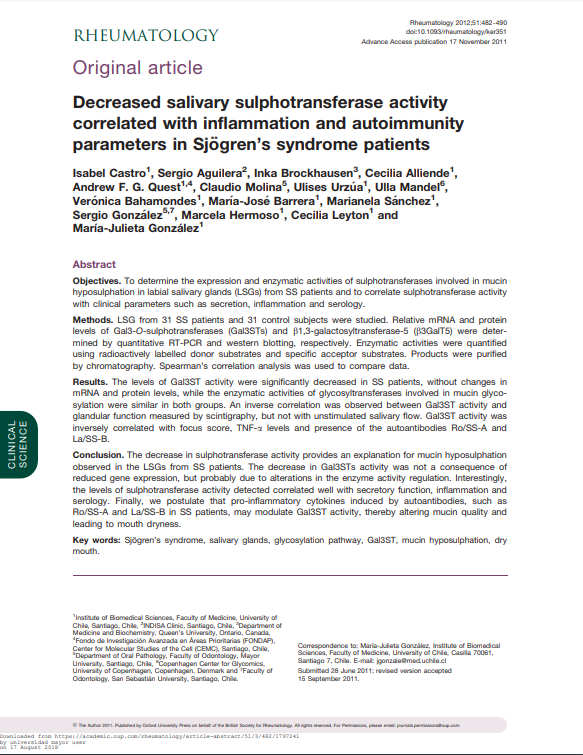 OBJECTIVES: To determine the expression and enzymatic activities of sulphotransferases involved in mucin hyposulphation in labial salivary glands (LSGs) from SS patients and to correlate sulphotransferase activity with clinical parameters such as secretion, inflammation and serology. METHODS: LSG from 31 SS patients and 31 control subjects were studied. Relative mRNA and protein levels of Gal3-O-sulphotransferases (Gal3STs) and β1,3-galactosyltransferase-5 (β3GalT5) were determined by quantitative RT-PCR and western blotting, respectively. Enzymatic activities were quantified using radioactively labelled donor substrates and specific acceptor substrates. Products were purified by chromatography. Spearman's correlation analysis was used to compare data. RESULTS: The levels of Gal3ST activity were significantly decreased in SS patients, without changes in mRNA and protein levels, while the enzymatic activities of glycosyltransferases involved in mucin glycosylation were similar in both groups. An inverse correlation was observed between Gal3ST activity and glandular function measured by scintigraphy, but not with unstimulated salivary flow. Gal3ST activity was inversely correlated with focus score, TNF-α levels and presence of the autoantibodies Ro/SS-A and La/SS-B. CONCLUSION: The decrease in sulphotransferase activity provides an explanation for mucin hyposulphation observed in the LSGs from SS patients. The decrease in Gal3STs activity was not a consequence of reduced gene expression, but probably due to alterations in the enzyme activity regulation. Interestingly, the levels of sulphotransferase activity detected correlated well with secretory function, inflammation and serology. Finally, we postulate that pro-inflammatory cytokines induced by autoantibodies, such as Ro/SS-A and La/SS-B in SS patients, may modulate Gal3ST activity, thereby altering mucin quality and leading to mouth dryness.