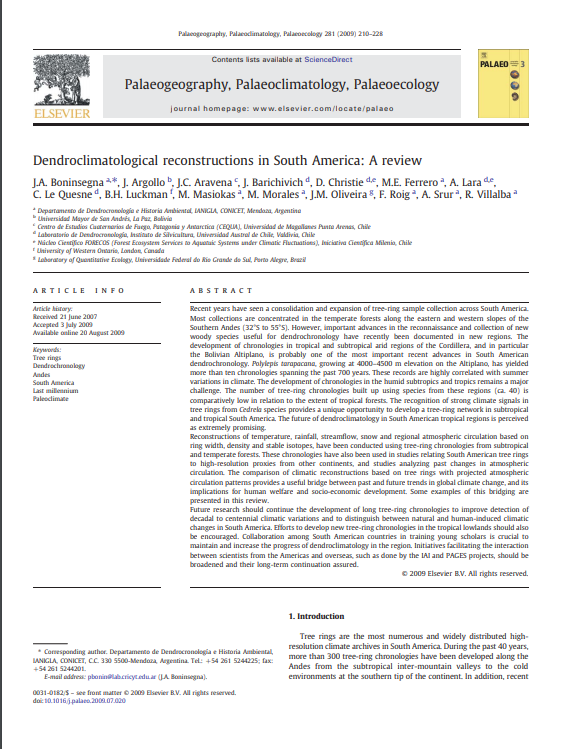 Recent years have seen a consolidation and expansion of tree-ring sample collection across South America. Most collections are concentrated in the temperate forests along the eastern and western slopes of the Southern Andes (32°S to 55°S). However, important advances in the reconnaissance and collection of new.PERIHUEICO woody species useful for dendrochronology have recently been documented in new regions. The development of chronologies in tropical and subtropical arid regions of the Cordillera, and in particular the Bolivian Altiplano, is probably one of the most important recent advances in South American dendrochronology. Polylepis tarapacana, growing at 4000–4500 m elevation on the Altiplano, has yielded more than ten chronologies spanning the past 700 years. These records are highly correlated with summer variations in climate. The development of chronologies in the humid subtropics and tropics remains a major challenge. The number of tree-ring chronologies built up using species from these regions (ca. 40) is comparatively low in relation to the extent of tropical forests. The recognition of strong climate signals in tree rings from Cedrela species provides a unique opportunity to develop a tree-ring network in subtropical and tropical South America. The future of dendroclimatology in South American tropical regions is perceived as extremely promising. Reconstructions of temperature, rainfall, streamflow, snow and regional atmospheric circulation based on ring width, density and stable isotopes, have been conducted using tree-ring chronologies from subtropical and temperate forests. These chronologies have also been used in studies relating South American tree rings to high-resolution proxies from other continents, and studies analyzing past changes in atmospheric circulation. The comparison of climatic reconstructions based on tree rings with projected atmospheric circulation patterns provides a useful bridge between past and future trends in global climate change, and its implications for human welfare and socio-economic development. Some examples of this bridging are presented in this review. Future research should continue the development of long tree-ring chronologies to improve detection of decadal to centennial climatic variations and to distinguish between natural and human-induced climatic changes in South America. Efforts to develop new tree-ring chronologies in the tropical lowlands should also be encouraged. Collaboration among South American countries in training young scholars is crucial to maintain and increase the progress of dendroclimatology in the region. Initiatives facilitating the interaction between scientists from the Americas and overseas, such as done by the IAI and PAGES projects, should be broadened and their long-term continuation assured.