Electromyographic Activity of the Cervical Flexor Muscles in Patients With Temporomandibular Disorders While Performing the Craniocervical Flexion Test: A Cross-Sectional Study 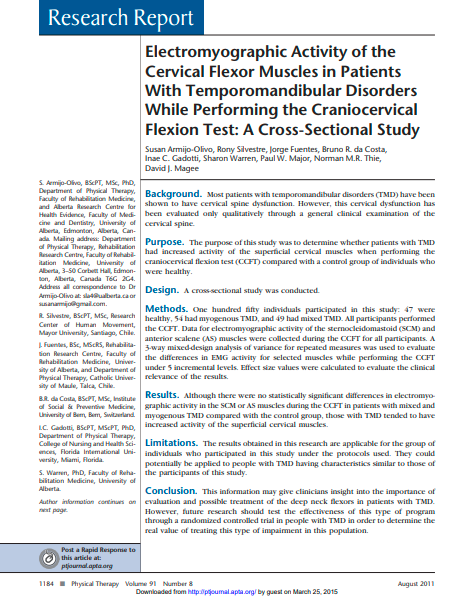 BACKGROUND: Most patients with temporomandibular disorders (TMD) have been shown to have cervical spine dysfunction. However, this cervical dysfunction has been evaluated only qualitatively through a general clinical examination of the cervical spine. PURPOSE: The purpose of this study was to determine whether patients with TMD had increased activity of the superficial cervical muscles when performing the craniocervical flexion test (CCFT) compared with a control group of individuals who were healthy. DESIGN: A cross-sectional study was conducted. METHODS: One hundred fifty individuals participated in this study: 47 were healthy, 54 had myogenous TMD, and 49 had mixed TMD. All participants performed the CCFT. Data for electromyographic activity of the sternocleidomastoid (SCM) and anterior scalene (AS) muscles were collected during the CCFT for all participants. A 3-way mixed-design analysis of variance for repeated measures was used to evaluate the differences in EMG activity for selected muscles while performing the CCFT under 5 incremental levels. Effect size values were calculated to evaluate the clinical relevance of the results. RESULTS: Although there were no statistically significant differences in electromyographic activity in the SCM or AS muscles during the CCFT in patients with mixed and myogenous TMD compared with the control group, those with TMD tended to have increased activity of the superficial cervical muscles. LIMITATIONS: The results obtained in this research are applicable for the group of individuals who participated in this study under the protocols used. They could potentially be applied to people with TMD having characteristics similar to those of the participants of this study. CONCLUSION: This information may give clinicians insight into the importance of evaluation and possible treatment of the deep neck flexors in patients with TMD. However, future research should test the effectiveness of this type of program through a randomized controlled trial in people with TMD in order to determine the real value of treating this type of impairment in this population.