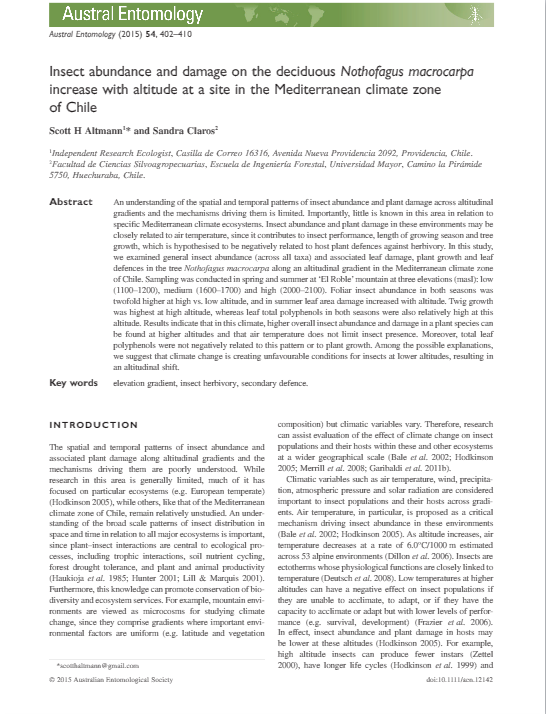 An understanding of the spatial and temporal patterns of insect abundance and plant damage across altitudinal gradients and the mechanisms driving them is limited. Importantly, little is known in this area in relation to specific Mediterranean climate ecosystems. Insect abundance and plant damage in these environments may be closely related to air temperature, since it contributes to insect performance, length of growing season and tree growth, which is hypothesised to be negatively related to host plant defences against herbivory. In this study, we examined general insect abundance (across all taxa) and associated leaf damage, plant growth and leaf defences in the tree Nothofagus macrocarpa along an altitudinal gradient in the Mediterranean climate zone of Chile. Sampling was conducted in spring and summer at ‘El Roble’ mountain at three elevations (masl): low (1100–1200), medium (1600–1700) and high (2000–2100). Foliar insect abundance in both seasons was twofold higher at high vs. low altitude, and in summer leaf area damage increased with altitude. Twig growth was highest at high altitude, whereas leaf total polyphenols in both seasons were also relatively high at this altitude. Results indicate that in this climate, higher overall insect abundance and damage in a plant species can be found at higher altitudes and that air temperature does not limit insect presence. Moreover, total leaf polyphenols were not negatively related to this pattern or to plant growth. Among the possible explanations, we suggest that climate change is creating unfavourable conditions for insects at lower altitudes, resulting in an altitudinal shift.