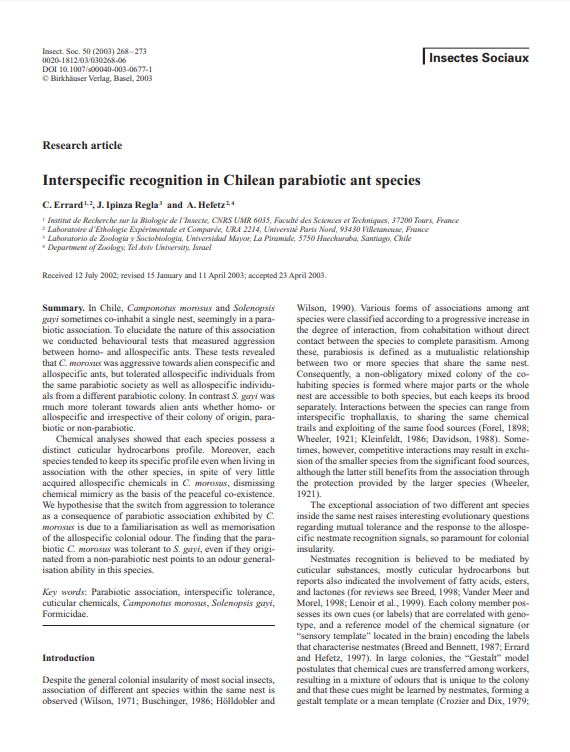 In Chile, Camponotus morosus and Solenopsis gayi sometimes co-inhabit a single nest, seemingly in a parabiotic association. To elucidate the nature of this association we conducted behavioural tests that measured aggression between homo- and allospecific ants. These tests revealed that C. morosus was aggressive towards alien conspecific and allospecific ants, but tolerated allospecific individuals from the same parabiotic society as well as allospecific individuals from a different parabiotic colony. In contrast S. gayi was much more tolerant towards alien ants whether homo- or allospecific and irrespective of their colony of origin, parabiotic or non-parabiotic. Chemical analyses showed that each species possess a distinct cuticular hydrocarbons profile. Moreover, each species tended to keep its specific profile even when living in association with the other species, in spite of very little acquired allospecific chemicals in C. morosus, dismissing chemical mimicry as the basis of the peaceful co-existence. We hypothesise that the switch from aggression to tolerance as a consequence of parabiotic association exhibited by C. morosus is due to a familiarisation as well as memorisation of the allospecific colonial odour. The finding that the parabiotic C. morosus was tolerant to S. gayi, even if they originated from a non-parabiotic nest points to an odour generalisation ability in this species.