Invasive fungal infections in Chile: a multicenter study of fungal prevalence and susceptibility during a 1-year period 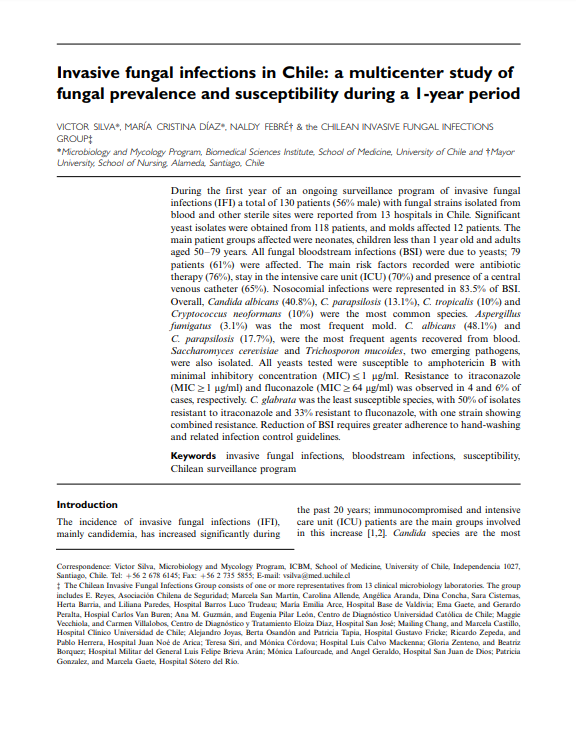 During the first year of an ongoing surveillance program of invasive fungal infections (IFI) a total of 130 patients (56% male) with fungal strains isolated from blood and other sterile sites were reported from 13 hospitals in Chile. Significant yeast isolates were obtained from 118 patients, and molds affected 12 patients. The main patient groups affected were neonates, children less than 1 year old and adults aged 50-79 years. All fungal bloodstream infections (BSI) were due to yeasts; 79 patients (61%) were affected. The main risk factors recorded were antibiotic therapy (76%), stay in the intensive care unit (ICU) (70%) and presence of a central venous catheter (65%). Nosocomial infections were represented in 83.5% of BSI. Overall, Candida albicans (40.8%), C. parapsilosis (13.1%), C. tropicalis (10%) and Cryptococcus neoformans (10%) were the most common species. Aspergillus fumigatus (3.1%) was the most frequent mold. C. albicans (48.1%) and C. parapsilosis (17.7%), were the most frequent agents recovered from blood. Saccharomyces cerevisiae and Trichosporon mucoides, two emerging pathogens, were also isolated. All yeasts tested were susceptible to amphotericin B with minimal inhibitory concentration (MIC) < or = 1 microg/ml. Resistance to itraconazole (MIC > or = 1 microg/ml) and fluconazole (MIC > or = 64 microg/ml) was observed in 4 and 6% of cases, respectively. C. glabrata was the least susceptible species, with 50% of isolates resistant to itraconazole and 33% resistant to fluconazole, with one strain showing combined resistance. Reduction of BSI requires greater adherence to hand-washing and related infection control guidelines.