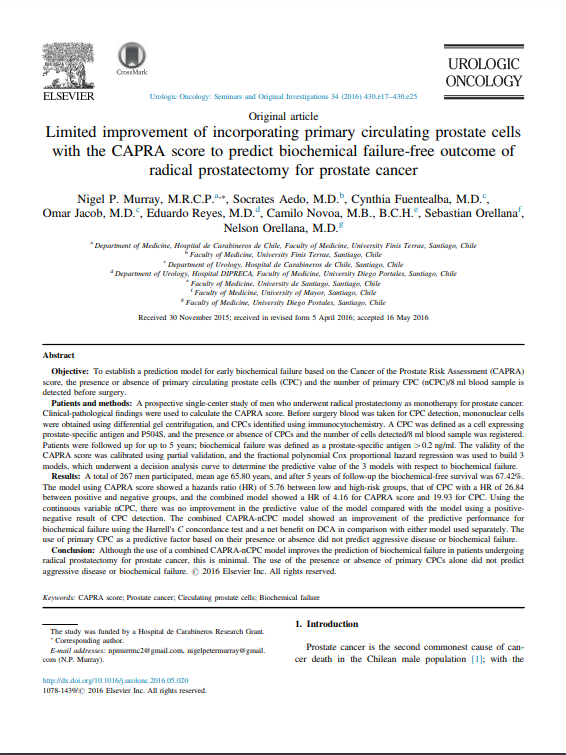 OBJECTIVE: To establish a prediction model for early biochemical failure based on the Cancer of the Prostate Risk Assessment (CAPRA) score, the presence or absence of primary circulating prostate cells (CPC) and the number of primary CPC (nCPC)/8ml blood sample is detected before surgery. PATIENTS AND METHODS: A prospective single-center study of men who underwent radical prostatectomy as monotherapy for prostate cancer. Clinical-pathological findings were used to calculate the CAPRA score. Before surgery blood was taken for CPC detection, mononuclear cells were obtained using differential gel centrifugation, and CPCs identified using immunocytochemistry. A CPC was defined as a cell expressing prostate-specific antigen and P504S, and the presence or absence of CPCs and the number of cells detected/8ml blood sample was registered. Patients were followed up for up to 5 years; biochemical failure was defined as a prostate-specific antigen>0.2ng/ml. The validity of the CAPRA score was calibrated using partial validation, and the fractional polynomial Cox proportional hazard regression was used to build 3 models, which underwent a decision analysis curve to determine the predictive value of the 3 models with respect to biochemical failure. RESULTS: A total of 267 men participated, mean age 65.80 years, and after 5 years of follow-up the biochemical-free survival was 67.42%. The model using CAPRA score showed a hazards ratio (HR) of 5.76 between low and high-risk groups, that of CPC with a HR of 26.84 between positive and negative groups, and the combined model showed a HR of 4.16 for CAPRA score and 19.93 for CPC. Using the continuous variable nCPC, there was no improvement in the predictive value of the model compared with the model using a positive-negative result of CPC detection. The combined CAPRA-nCPC model showed an improvement of the predictive performance for biochemical failure using the Harrell׳s C concordance test and a net benefit on DCA in comparison with either model used separately. The use of primary CPC as a predictive factor based on their presence or absence did not predict aggressive disease or biochemical failure. CONCLUSION: Although the use of a combined CAPRA-nCPC model improves the prediction of biochemical failure in patients undergoing radical prostatectomy for prostate cancer, this is minimal. The use of the presence or absence of primary CPCs alone did not predict aggressive disease or biochemical failure.