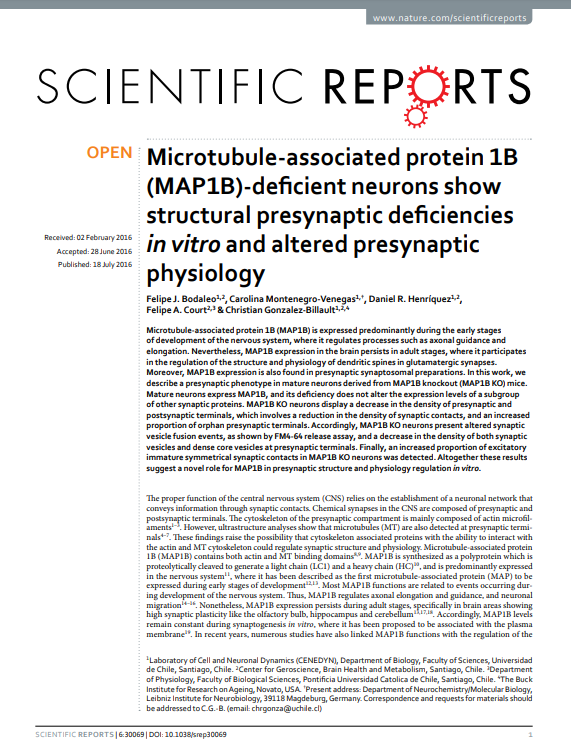 Microtubule-associated protein 1B (MAP1B) is expressed predominantly during the early stages of development of the nervous system, where it regulates processes such as axonal guidance and elongation. Nevertheless, MAP1B expression in the brain persists in adult stages, where it participates in the regulation of the structure and physiology of dendritic spines in glutamatergic synapses. Moreover, MAP1B expression is also found in presynaptic synaptosomal preparations. In this work, we describe a presynaptic phenotype in mature neurons derived from MAP1B knockout (MAP1B KO) mice. Mature neurons express MAP1B, and its deficiency does not alter the expression levels of a subgroup of other synaptic proteins. MAP1B KO neurons display a decrease in the density of presynaptic and postsynaptic terminals, which involves a reduction in the density of synaptic contacts, and an increased proportion of orphan presynaptic terminals. Accordingly, MAP1B KO neurons present altered synaptic vesicle fusion events, as shown by FM4-64 release assay, and a decrease in the density of both synaptic vesicles and dense core vesicles at presynaptic terminals. Finally, an increased proportion of excitatory immature symmetrical synaptic contacts in MAP1B KO neurons was detected. Altogether these results suggest a novel role for MAP1B in presynaptic structure and physiology regulation in vitro.