Social structure in a family group of Guanaco (Lama guanicoe, Ungulate): Is female hierarchy based on 'prior attributes' or 'social dynamics'? 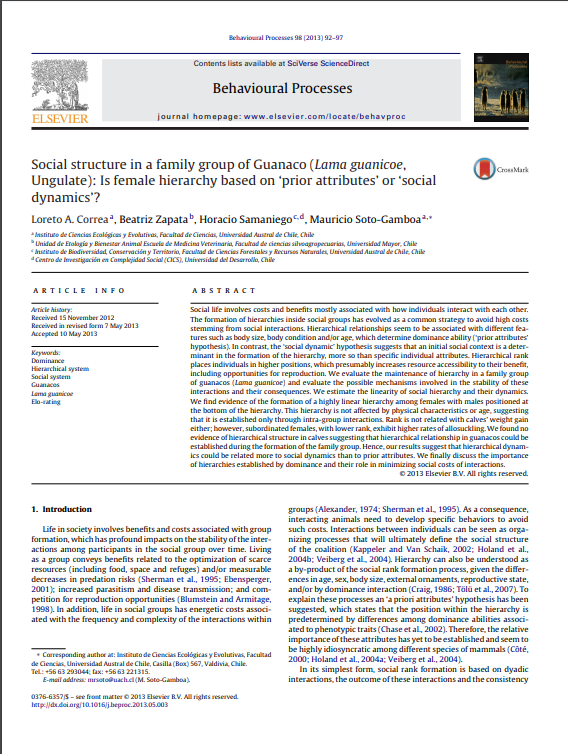 Social life involves costs and benefits mostly associated with how individuals interact with each other. The formation of hierarchies inside social groups has evolved as a common strategy to avoid high costs stemming from social interactions. Hierarchical relationships seem to be associated with different features such as body size, body condition and/or age, which determine dominance ability ('prior attributes' hypothesis). In contrast, the 'social dynamic' hypothesis suggests that an initial social context is a determinant in the formation of the hierarchy, more so than specific individual attributes. Hierarchical rank places individuals in higher positions, which presumably increases resource accessibility to their benefit, including opportunities for reproduction. We evaluate the maintenance of hierarchy in a family group of guanacos (Lama guanicoe) and evaluate the possible mechanisms involved in the stability of these interactions and their consequences. We estimate the linearity of social hierarchy and their dynamics. We find evidence of the formation of a highly linear hierarchy among females with males positioned at the bottom of the hierarchy. This hierarchy is not affected by physical characteristics or age, suggesting that it is established only through intra-group interactions. Rank is not related with calves' weight gain either; however, subordinated females, with lower rank, exhibit higher rates of allosuckling. We found no evidence of hierarchical structure in calves suggesting that hierarchical relationship in guanacos could be established during the formation of the family group. Hence, our results suggest that hierarchical dynamics could be related more to social dynamics than to prior attributes. We finally discuss the importance of hierarchies established by dominance and their role in minimizing social costs of interactions.