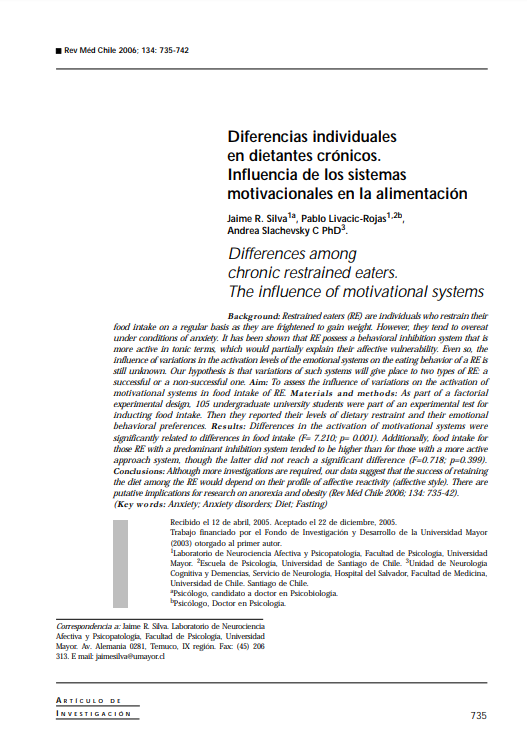 Background: Restrained eaters (RE) are individuals who restrain their food intake on a regular basis as they are frightened to gain weight. However, they tend to overeat under conditions of anxiety. It has been shown that RE possess a behavioral inhibition system that is more active in tonic terms, which would partially explain their affective vulnerability. Even so, the influence of variations in the activation levels of the emotional systems on the eating behavior of a RE is still unknown. Our hypothesis is that variations of such systems will give place to two types of RE: a successful or a non-successful one. Aim: To assess the influence of variations on the activation of motivational systems in food intake of RE. Materials and methods: As part of a factorial experimental design, 105 undergraduate university students were part of an experimental test for inducting food intake. Then they reported their levels of dietary restraint and their emotional behavioral preferences. Results: Differences in the activation of motivational systems were significantly related to differences in food intake (F= 7.210; p= 0.001). Additionally, food intake for those RE with a predominant inhibition system tended to be higher than for those with a more active approach system, though the latter did not reach a significant difference (F=0.718; p=0.399). Conclusions: Although more investigations are required, our data suggest that the success of retaining the diet among the RE would depend on their profile of affective reactivity (affective style). There are putative implications for research on anorexia and obesity.