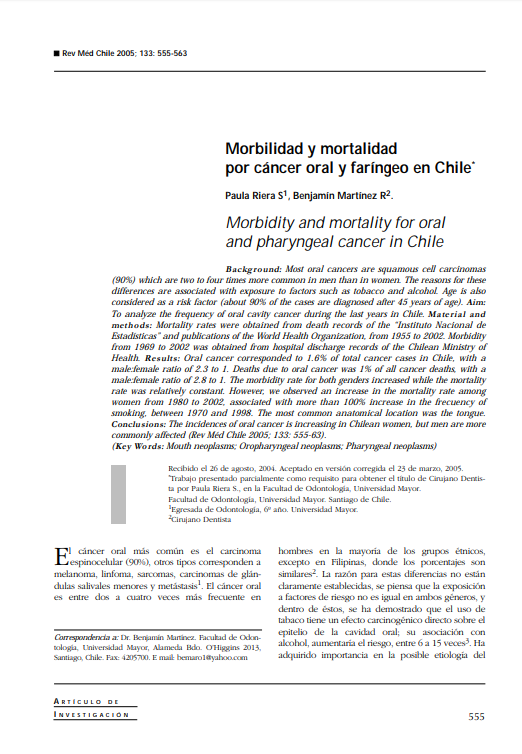 Background: Most oral cancers are squamous cell carcinomas (90%) which are two to four times more common in men than in women. The reasons for these differences are associated with exposure to factors such as tobacco and alcohol. Age is also considered as a risk factor (about 90% of the cases are diagnosed after 45 years of age). Aim: To analyze the frequency of oral cavity cancer during the last years in Chile. Material and methods: Mortality rates were obtained from death records of the "Instituto Nacional de Estadísticas" and publications of the World Health Organization, from 1955 to 2002. Morbidity from 1969 to 2002 was obtained from hospital discharge records of the Chilean Ministry of Health. Results: Oral cancer corresponded to 1.6% of total cancer cases in Chile, with a male:female ratio of 2.3 to 1. Deaths due to oral cancer was 1% of all cancer deaths, with a male:female ratio of 2.8 to 1. The morbidity rate for both genders increased while the mortality rate was relatively constant. However, we observed an increase in the mortality rate among women from 1980 to 2002, associated with more than 100% increase in the frecuency of smoking, between 1970 and 1998. The most common anatomical location was the tongue. Conclusions: The incidences of oral cancer is increasing in Chilean women, but men are more commonly affected.