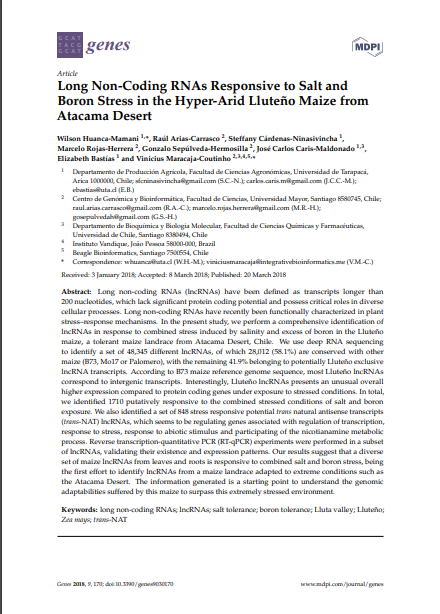 Long non-coding RNAs (lncRNAs) have been defined as transcripts longer than 200 nucleotides, which lack significant protein coding potential and possess critical roles in diverse cellular processes. Long non-coding RNAs have recently been functionally characterized in plant stress-response mechanisms. In the present study, we perform a comprehensive identification of lncRNAs in response to combined stress induced by salinity and excess of boron in the Lluteno maize, a tolerant maize landrace from Atacama Desert, Chile. We use deep RNA sequencing to identify a set of 48,345 different lncRNAs, of which 28,012 (58.1%) are conserved with other maize (B73, Mo17 or Palomero), with the remaining 41.9% belonging to potentially Lluteno exclusive lncRNA transcripts. According to B73 maize reference genome sequence, most Lluteno lncRNAs correspond to intergenic transcripts. Interestingly, Lluteno lncRNAs presents an unusual overall higher expression compared to protein coding genes under exposure to stressed conditions. In total, we identified 1710 putatively responsive to the combined stressed conditions of salt and boron exposure. We also identified a set of 848 stress responsive potential trans natural antisense transcripts (trans-NAT) lncRNAs, which seems to be regulating genes associated with regulation of transcription, response to stress, response to abiotic stimulus and participating of the nicotianamine metabolic process. Reverse transcription-quantitative PCR (RT-qPCR) experiments were performed in a subset of lncRNAs, validating their existence and expression patterns. Our results suggest that a diverse set of maize lncRNAs from leaves and roots is responsive to combined salt and boron stress, being the first effort to identify lncRNAs from a maize landrace adapted to extreme conditions such as the Atacama Desert. The information generated is a starting point to understand the genomic adaptabilities suffered by this maize to surpass this extremely stressed environment.