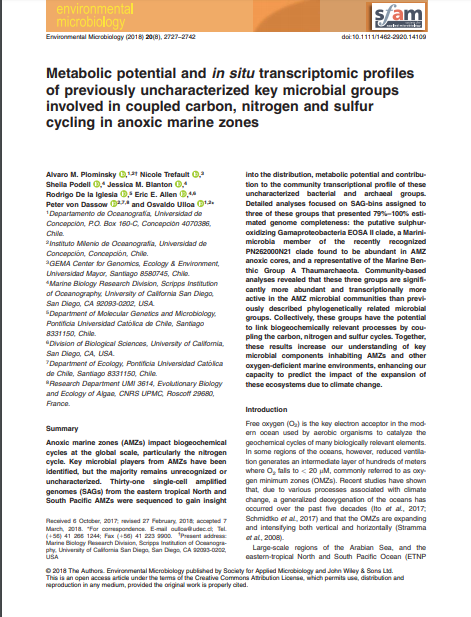 Anoxic marine zones (AMZs) impact biogeochemical cycles at the global scale, particularly the nitrogen cycle. Key microbial players from AMZs have been identified, but the majority remains unrecognized or uncharacterized. Thirty-one single-cell amplified genomes (SAGs) from the eastern tropical North and South Pacific AMZs were sequenced to gain insight into the distribution, metabolic potential and contribution to the community transcriptional profile of these uncharacterized bacterial and archaeal groups. Detailed analyses focused on SAG-bins assigned to three of these groups that presented 79%-100% estimated genome completeness: the putative sulphur-oxidizing Gamaproteobacteria EOSA II clade, a Marinimicrobia member of the recently recognized PN262000N21 clade found to be abundant in AMZ anoxic cores, and a representative of the Marine Benthic Group A Thaumarchaeota. Community-based analyses revealed that these three groups are significantly more abundant and transcriptionally more active in the AMZ microbial communities than previously described phylogenetically related microbial groups. Collectively, these groups have the potential to link biogeochemically relevant processes by coupling the carbon, nitrogen and sulfur cycles. Together, these results increase our understanding of key microbial components inhabiting AMZs and other oxygen-deficient marine environments, enhancing our capacity to predict the impact of the expansion of these ecosystems due to climate change.