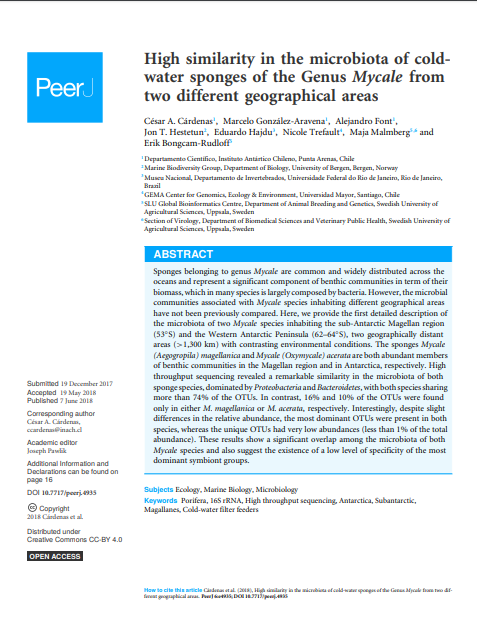 Sponges belonging to genus Mycale are common and widely distributed across the oceans and represent a significant component of benthic communities in term of their biomass, which in many species is largely composed by bacteria. However, the microbial communities associated with Mycale species inhabiting different geographical areas have not been previously compared. Here, we provide the first detailed description of the microbiota of two Mycale species inhabiting the sub-Antarctic Magellan region (53 degrees S) and the Western Antarctic Peninsula (62-64 degrees S), two geographically distant areas (> 1,300 km) with contrasting environmental conditions. The sponges Mycale (Aegogropila) magellanica and Mycale (Oxymycale) acerata are both abundant members of benthic communities in the Magellan region and in Antarctica, respectively. High throughput sequencing revealed a remarkable similarity in the microbiota of both sponge species, dominated by Proteobacteria and Bacteroidetes, with both species sharing more than 74% of the OTUs. In contrast, 16% and 10% of the OTUs were found only in either M. magellanica or M. acerata, respectively. Interestingly, despite slight differences in the relative abundance, the most dominant OTUs were present in both species, whereas the unique OTUs had very low abundances (less than 1% of the total abundance). These results show a significant overlap among the microbiota of both Mycale species and also suggest the existence of a low level of specificity of the most dominant symbiont groups.