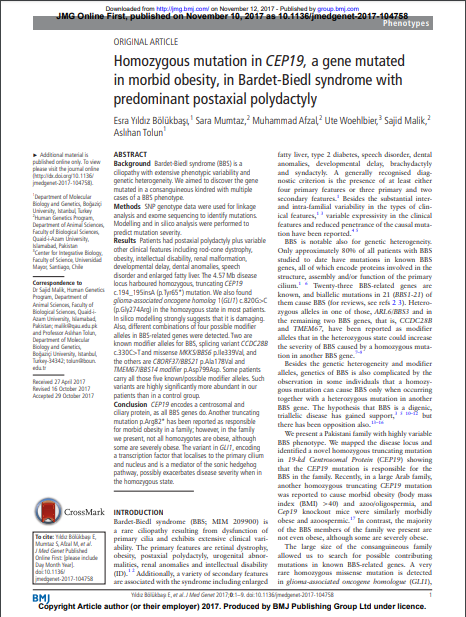 Background Bardet-Biedl syndrome (BBS) is a ciliopathy with extensive phenotypic variability and genetic heterogeneity. We aimed to discover the gene mutated in a consanguineous kindred with multiple cases of a BBS phenotype. Methods SNP genotype data were used for linkage analysis and exome sequencing to identify mutations. Modelling and in silico analysis were performed to predict mutation severity. Results Patients had postaxial polydactyly plus variable other clinical features including rod-cone dystrophy, obesity, intellectual disability, renal malformation, developmental delay, dental anomalies, speech disorder and enlarged fatty liver. The 4.57 Mb disease locus harboured homozygous, truncating CEP19 c. 194_195insA (p.Tyr65*) mutation. We also found glioma-associated oncogene homolog 1(GLI1) c. 820G>C (p.Gly274Arg) in the homozygous state in most patients. In silico modelling strongly suggests that it is damaging. Also, different combinations of four possible modifier alleles in BBS-related genes were detected. Two are known modifier alleles for BBS, splicing variant CCDC28B c. 330C>T and missense MKKS/BBS6 p.Ile339Val, and the others are C8ORF37/BBS21 p.Ala178Val and TMEM67/BBS14 modifier p.Asp799Asp. Some patients carry all those five known/possible modifier alleles. Such variants are highly significantly more abundant in our patients than in a control group. Conclusion CEP19 encodes a centrosomal and ciliary protein, as all BBS genes do. Another truncating mutation p.Arg82* has been reported as responsible for morbid obesity in a family; however, in the family we present, not all homozygotes are obese, although some are severely obese. The variant in GLI1, encoding a transcription factor that localises to the primary cilium and nucleus and is a mediator of the sonic hedgehog pathway, possibly exacerbates disease severity when in the homozygous state.