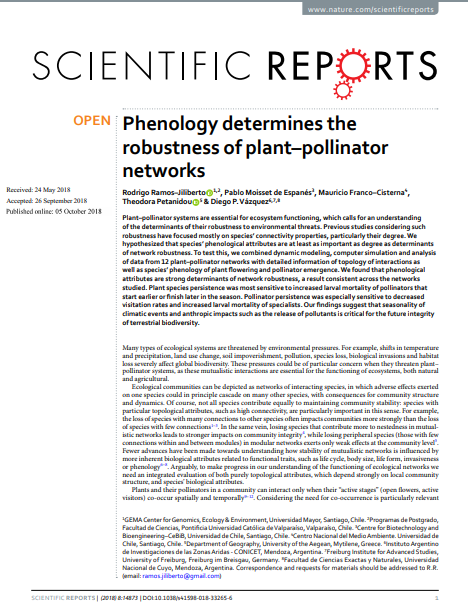 Plant-pollinator systems are essential for ecosystem functioning, which calls for an understanding of the determinants of their robustness to environmental threats. Previous studies considering such robustness have focused mostly on species' connectivity properties, particularly their degree. We hypothesized that species' phenological attributes are at least as important as degree as determinants of network robustness. To test this, we combined dynamic modeling, computer simulation and analysis of data from 12 plant-pollinator networks with detailed information of topology of interactions as well as species' phenology of plant flowering and pollinator emergence. We found that phenological attributes are strong determinants of network robustness, a result consistent across the networks studied. Plant species persistence was most sensitive to increased larval mortality of pollinators that start earlier or finish later in the season. Pollinator persistence was especially sensitive to decreased visitation rates and increased larval mortality of specialists. Our findings suggest that seasonality of climatic events and anthropic impacts such as the release of pollutants is critical for the future integrity of terrestrial biodiversity.