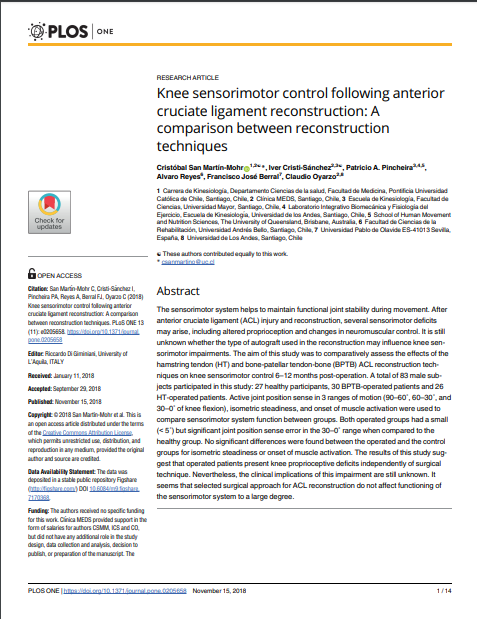 The sensorimotor system helps to maintain functional joint stability during movement. After anterior cruciate ligament (ACL) injury and reconstruction, several sensorimotor deficits may arise, including altered proprioception and changes in neuromuscular control. It is still unknown whether the type of autograft used in the reconstruction may influence knee sensorimotor impairments. The aim of this study was to comparatively assess the effects of the hamstring tendon (HT) and bone-patellar tendon-bone (BPTB) ACL reconstruction techniques on knee sensorimotor control 6-12 months post-operation. A total of 83 male subjects participated in this study: 27 healthy participants, 30 BPTB-operated patients and 26 HT-operated patients. Active joint position sense in 3 ranges of motion (90-60 degrees, 60-30 degrees, and 30-0 degrees of knee flexion), isometric steadiness, and onset of muscle activation were used to compare sensorimotor system function between groups. Both operated groups had a small (<5 degrees) but significant joint position sense error in the 30-0 degrees range when compared to the healthy group. No significant differences were found between the operated and the control groups for isometric steadiness or onset of muscle activation. The results of this study suggest that operated patients present knee proprioceptive deficits independently of surgical technique. Nevertheless, the clinical implications of this impairment are still unknown. It seems that selected surgical approach for ACL reconstruction do not affect functioning of the sensorimotor system to a large degree.