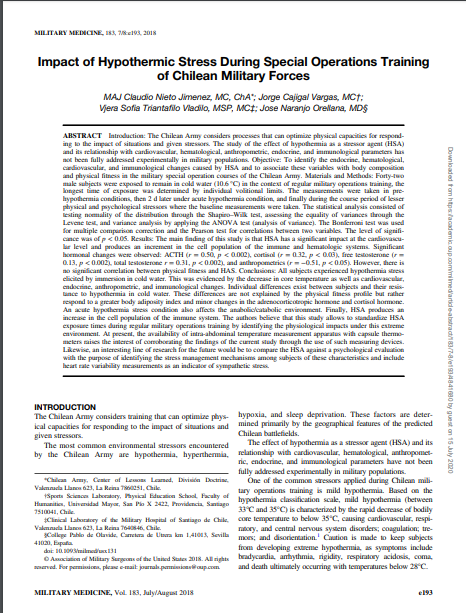 Introduction: The Chilean Army considers processes that can optimize physical capacities for responding to the impact of situations and given stressors. The study of the effect of hypothermia as a stressor agent (HSA) and its relationship with cardiovascular, hematological, anthropometric, endocrine, and immunological parameters has not been fully addressed experimentally in military populations. Objective: To identify the endocrine, hematological, cardiovascular, and immunological changes caused by HSA and to associate these variables with body composition and physical fitness in the military special operation courses of the Chilean Army. Materials and Methods: Forty-two male subjects were exposed to remain in cold water (10.6 degrees C) in the context of regular military operations training, the longest time of exposure was determined by individual volitional limits. The measurements were taken in prehypothermia conditions, then 2 d later under acute hypothermia condition, and finally during the course period of lesser physical and psychological stressors where the baseline measurements were taken. The statistical analysis consisted of testing normality of the distribution through the Shapiro-Wilk test, assessing the equality of variances through the Levene test, and variance analysis by applying the ANOVA test (analysis of variance). The Bonferroni test was used for multiple comparison correction and the Pearson test for correlations between two variables. The level of significance was of p < 0.05. Results: The main finding of this study is that HSA has a significant impact at the cardiovascular level and produces an increment in the cell population of the immune and hematologic systems. Significant hormonal changes were observed: ACTH (r = 0.50, p < 0.002), cortisol (r = 0.32, p < 0.03), free testosterone (r = 0.13, p < 0.002), total testosterone r = 0.31, p < 0.002), and anthropometrics (r = -0.51, p < 0.05). However, there is no significant correlation between physical fitness and HAS. Conclusions: All subjects experienced hypothermia stress elicited by immersion in cold water. This was evidenced by the decrease in core temperature as well as cardiovascular, endocrine, anthropometric, and immunological changes. Individual differences exist between subjects and their resistance to hypothermia in cold water. These differences are not explained by the physical fitness profile but rather respond to a greater body adiposity index and minor changes in the adrenocorticotropic hormone and cortisol hormone. An acute hypothermia stress condition also affects the anabolic/catabolic environment. Finally, HSA produces an increase in the cell population of the immune system. The authors believe that this study allows to standardize HSA exposure times during regular military operations training by identifying the physiological impacts under this extreme environment. At present, the availability of intra-abdominal temperature measurement apparatus with capsule thermometers raises the interest of corroborating the findings of the current study through the use of such measuring devices. Likewise, an interesting line of research for the future would be to compare the HSA against a psychological evaluation with the purpose of identifying the stress management mechanisms among subjects of these characteristics and include heart rate variability measurements as an indicator of sympathetic stress.