Where is the enigmatic Telmatobius halli Noble 1938? Rediscovery and clarification of a frog species not seen for 80 years 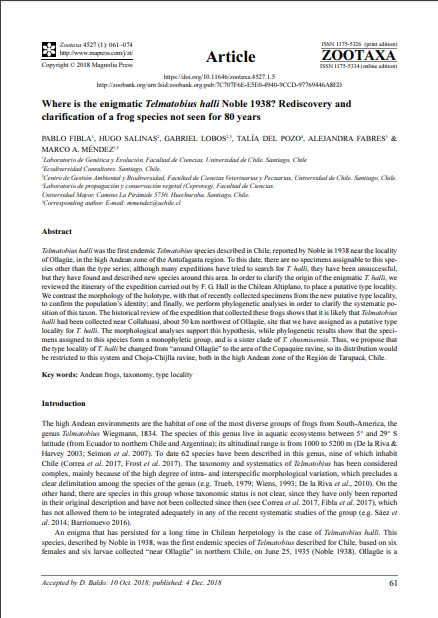 Telmatobius halli was the first endemic Telmatobius species described in Chile, reported by Noble in 1938 near the locality of Ollague, in the high Andean zone of the Antofagasta region. To this date, there are no specimens assignable to this species other than the type series; although many expeditions have tried to search for T. halli, they have been unsuccessful, but they have found and described new species around this area. In order to clarify the origin of the enigmatic T. halli, we reviewed the itinerary of the expedition carried out by F. G. Hall in the Chilean Altiplano, to place a putative type locality. We contrast the morphology of the holotype, with that of recently collected specimens from the new putative type locality, to confirm the population's identity; and finally, we perform phylogenetic analyses in order to clarify the systematic position of this taxon. The historical review of the expedition that collected these frogs shows that it is likely that Telmatobius halli had been collected near Collahuasi, about 50 km northwest of Ollague, site that we have assigned as a putative type locality for T. halli. The morphological analyses support this hypothesis, while phylogenetic results show that the specimens assigned to this species form a monophyletic group, and is a sister Glade of T. chusmisensis. Thus, we propose that the type locality of T. halli be changed from"around Ollague"to the area of the Copaquire ravine, so its distribution would be restricted to this system and Choja-Chijlla ravine, both in the high Andean zone of the Region de Tarapaca, Chile.