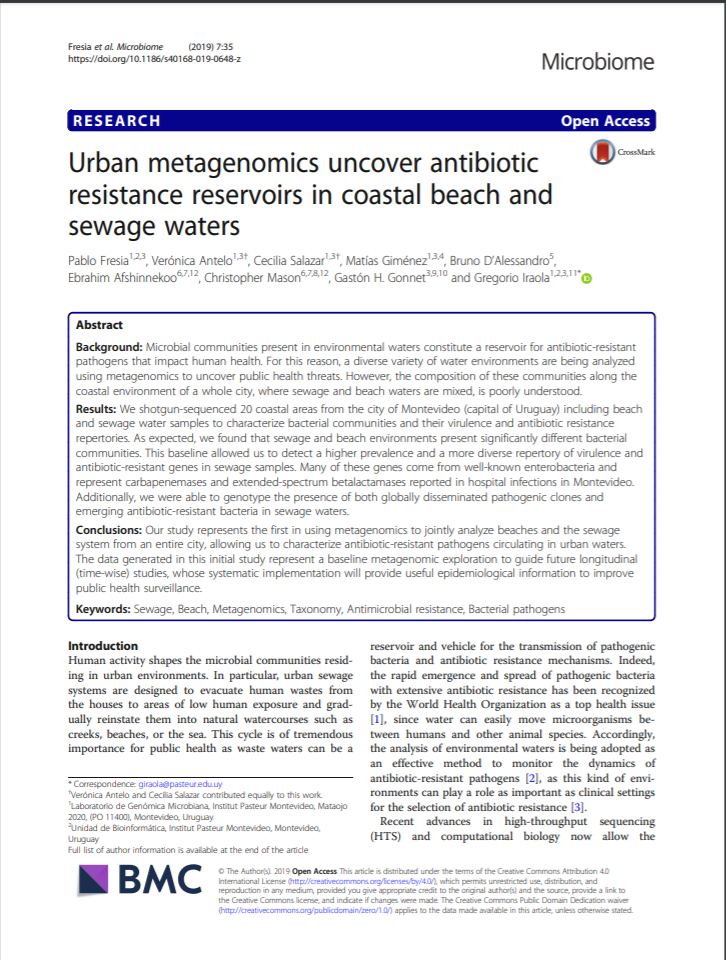 BackgroundMicrobial communities present in environmental waters constitute a reservoir for antibiotic-resistant pathogens that impact human health. For this reason, a diverse variety of water environments are being analyzed using metagenomics to uncover public health threats. However, the composition of these communities along the coastal environment of a whole city, where sewage and beach waters are mixed, is poorly understood.ResultsWe shotgun-sequenced 20 coastal areas from the city of Montevideo (capital of Uruguay) including beach and sewage water samples to characterize bacterial communities and their virulence and antibiotic resistance repertories. As expected, we found that sewage and beach environments present significantly different bacterial communities. This baseline allowed us to detect a higher prevalence and a more diverse repertory of virulence and antibiotic-resistant genes in sewage samples. Many of these genes come from well-known enterobacteria and represent carbapenemases and extended-spectrum betalactamases reported in hospital infections in Montevideo. Additionally, we were able to genotype the presence of both globally disseminated pathogenic clones and emerging antibiotic-resistant bacteria in sewage waters.ConclusionsOur study represents the first in using metagenomics to jointly analyze beaches and the sewage system from an entire city, allowing us to characterize antibiotic-resistant pathogens circulating in urban waters. The data generated in this initial study represent a baseline metagenomic exploration to guide future longitudinal (time-wise) studies, whose systematic implementation will provide useful epidemiological information to improve public health surveillance.