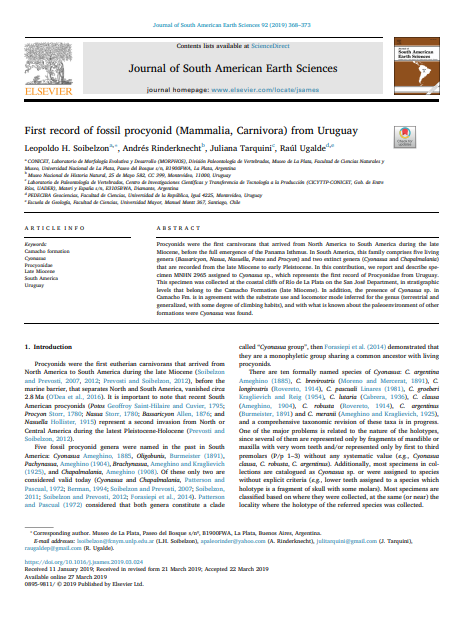 Procyonids were the first carnivorans that arrived from North America to South America during the late Miocene, before the full emergence of the Panama Isthmus. In South America, this family comprises five living genera (Bassaricyon, Nasua, Nasuella, Potos and Procyon) and two extinct genera (Cyonasua and Chapalmalania) that are recorded from the late Miocene to early Pleistocene. In this contribution, we report and describe specimen MNHN 2965 assigned to Cyonasua sp., which represents the first record of Procyonidae from Uruguay. This specimen was collected at the coastal cliffs of Rio de La Plata on the San Jose Department, in stratigraphic levels that belong to the Camacho Formation (late Miocene). In addition, the presence of Cyonasua sp. in Camacho Fm. is in agreement with the substrate use and locomotor mode inferred for the genus (terrestrial and generalized, with some degree of climbing habits), and with what is known about the paleoenvironment of other formations were Cyonasua was found.