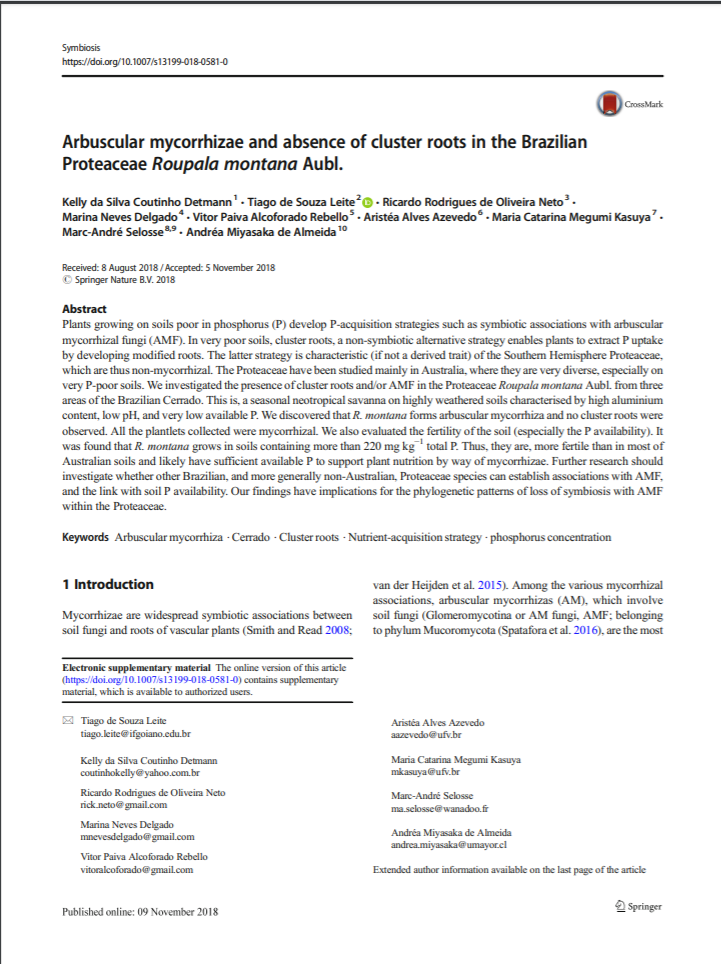 Plants growing on soils poor in phosphorus (P) develop P-acquisition strategies such as symbiotic associations with arbuscular mycorrhizal fungi (AMF). In very poor soils, cluster roots, a non-symbiotic alternative strategy enables plants to extract P uptake by developing modified roots. The latter strategy is characteristic (if not a derived trait) of the Southern Hemisphere Proteaceae, which are thus non-mycorrhizal. The Proteaceae have been studied mainly in Australia, where they are very diverse, especially on very P-poor soils. We investigated the presence of cluster roots and/or AMF in the Proteaceae Roupala montana Aubl. from three areas of the Brazilian Cerrado. This is, a seasonal neotropical savanna on highly weathered soils characterised by high aluminium content, low pH, and very low available P. We discovered that R. montana forms arbuscular mycorrhiza and no cluster roots were observed. All the plantlets collected were mycorrhizal. We also evaluated the fertility of the soil (especially the P availability). It was found that R. montana grows in soils containing more than 220mgkg(-1) total P. Thus, they are, more fertile than in most of Australian soils and likely have sufficient available P to support plant nutrition by way of mycorrhizae. Further research should investigate whether other Brazilian, and more generally non-Australian, Proteaceae species can establish associations with AMF, and the link with soil P availability. Our findings have implications for the phylogenetic patterns of loss of symbiosis with AMF within the Proteaceae.