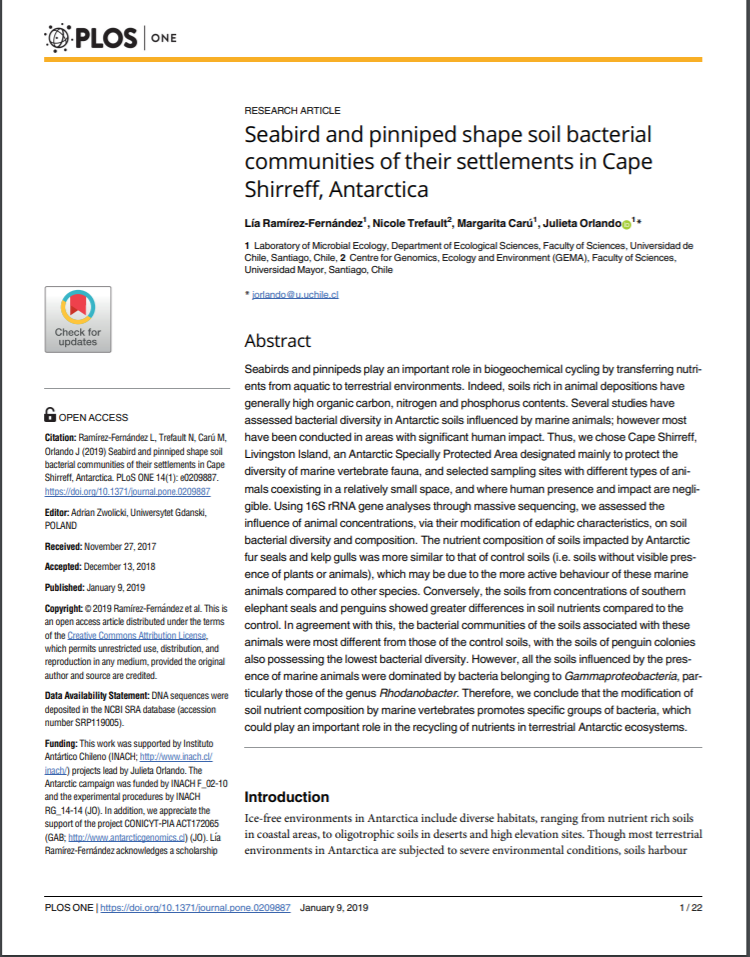 Seabirds and pinnipeds play an important role in biogeochemical cycling by transferring nutrients from aquatic to terrestrial environments. Indeed, soils rich in animal depositions have generally high organic carbon, nitrogen and phosphorus contents. Several studies have assessed bacterial diversity in Antarctic soils influenced by marine animals; however most have been conducted in areas with significant human impact. Thus, we chose Cape Shirreff, Livingston Island, an Antarctic Specially Protected Area designated mainly to protect the diversity of marine vertebrate fauna, and selected sampling sites with different types of animals coexisting in a relatively small space, and where human presence and impact are negligible. Using 16S rRNA gene analyses through massive sequencing, we assessed the influence of animal concentrations, via their modification of edaphic characteristics, on soil bacterial diversity and composition. The nutrient composition of soils impacted by Antarctic fur seals and kelp gulls was more similar to that of control soils (i.e. soils without visible presence of plants or animals), which may be due to the more active behaviour of these marine animals compared to other species. Conversely, the soils from concentrations of southern elephant seals and penguins showed greater differences in soil nutrients compared to the control. In agreement with this, the bacterial communities of the soils associated with these animals were most different from those of the control soils, with the soils of penguin colonies also possessing the lowest bacterial diversity. However, all the soils influenced by the presence of marine animals were dominated by bacteria belonging to Gammaproteobacteria, particularly those of the genus Rhodanobacter. Therefore, we conclude that the modification of soil nutrient composition by marine vertebrates promotes specific groups of bacteria, which could play an important role in the recycling of nutrients in terrestrial Antarctic ecosystems.