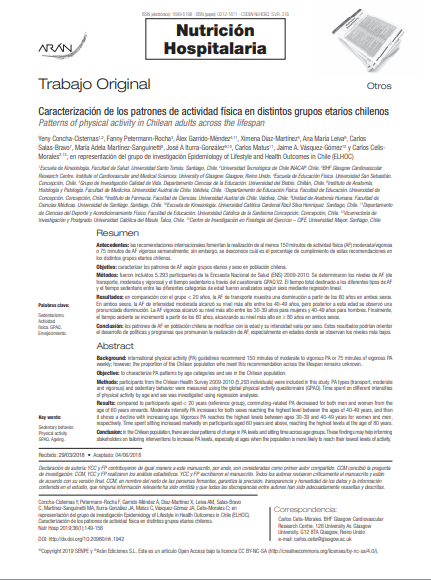 Background: international physical activity (PA) guidelines recommend 150 minutes of moderate to vigorous PA or 75 minutes of vigorous PA weekly; however, the proportion of the Chilean population who meet this recommendation across the lifespan remains unknown. Objective: to characterize PA patterns by age categories and sex in the Chilean population. Methods: participants from the Chilean Health Survey 2009-2010 (5,293 individuals) were included in this study. PA types (transport, moderate and vigorous) and sedentary behavior were measured using the global physical activity questionnaire (GPAQ). Time spent on different intensities of physical activity by age and sex was investigated using regression analyses. Results: compared to participants aged < 20 years (reference group), commuting-related PA decreased for both men and women from the age of 60 years onwards. Moderate intensity PA increases for both sexes reaching the highest level between the ages of 40-49 years, and then it shows a decline with increasing age. Vigorous PA reaches the highest levels between ages 30-39 and 40-49 years for women and men, respectively. Time spent sitting increased markedly on participants aged 60 years and above, reaching the highest levels at the age of 80 years. Conclusion: in the Chilean population, there are clear patterns of change in PA levels and sitting time across age groups. These fi ndings may help informing stakeholders on tailoring interventions to increase PA levels, especially at ages when the population is more likely to reach their lowest levels of activity.