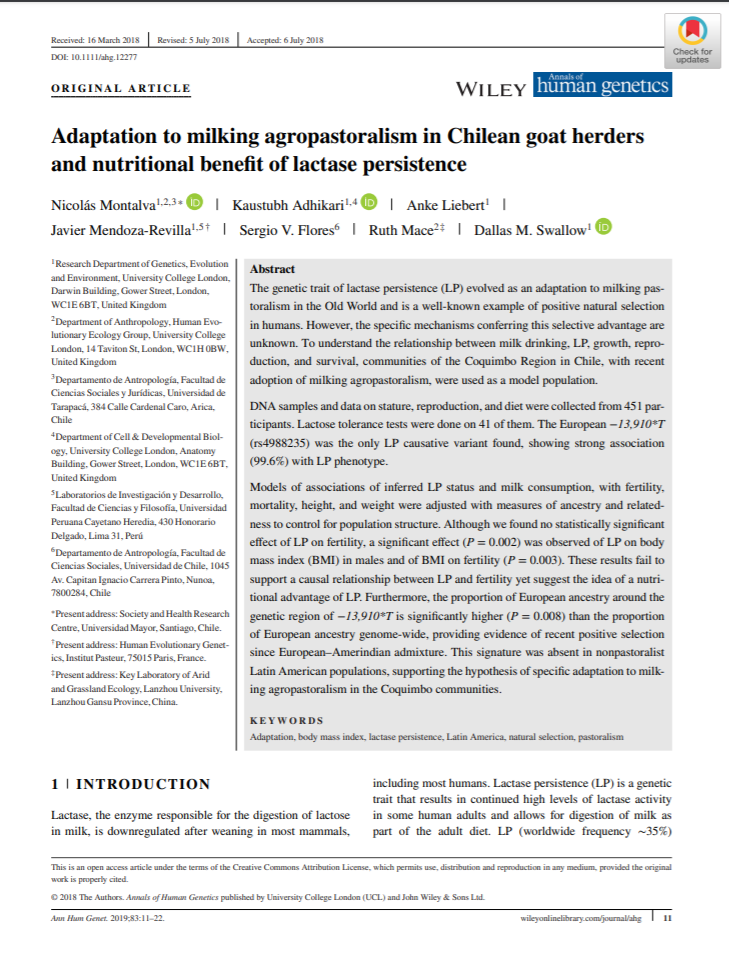 The genetic trait of lactase persistence (LP) evolved as an adaptation to milking pastoralism in the Old World and is a well-known example of positive natural selection in humans. However, the specific mechanisms conferring this selective advantage are unknown. To understand the relationship between milk drinking, LP, growth, reproduction, and survival, communities of the Coquimbo Region in Chile, with recent adoption of milking agropastoralism, were used as a model population. DNA samples and data on stature, reproduction, and diet were collected from 451 participants. Lactose tolerance tests were done on 41 of them. The European -13,910*T (rs4988235) was the only LP causative variant found, showing strong association (99.6%) with LP phenotype. Models of associations of inferred LP status and milk consumption, with fertility, mortality, height, and weight were adjusted with measures of ancestry and relatedness to control for population structure. Although we found no statistically significant effect of LP on fertility, a significant effect (P = 0.002) was observed of LP on body mass index (BMI) in males and of BMI on fertility (P = 0.003). These results fail to support a causal relationship between LP and fertility yet suggest the idea of a nutritional advantage of LP. Furthermore, the proportion of European ancestry around the genetic region of -13,910*T is significantly higher (P = 0.008) than the proportion of European ancestry genome-wide, providing evidence of recent positive selection since European-Amerindian admixture. This signature was absent in nonpastoralist Latin American populations, supporting the hypothesis of specific adaptation to milking agropastoralism in the Coquimbo communities.