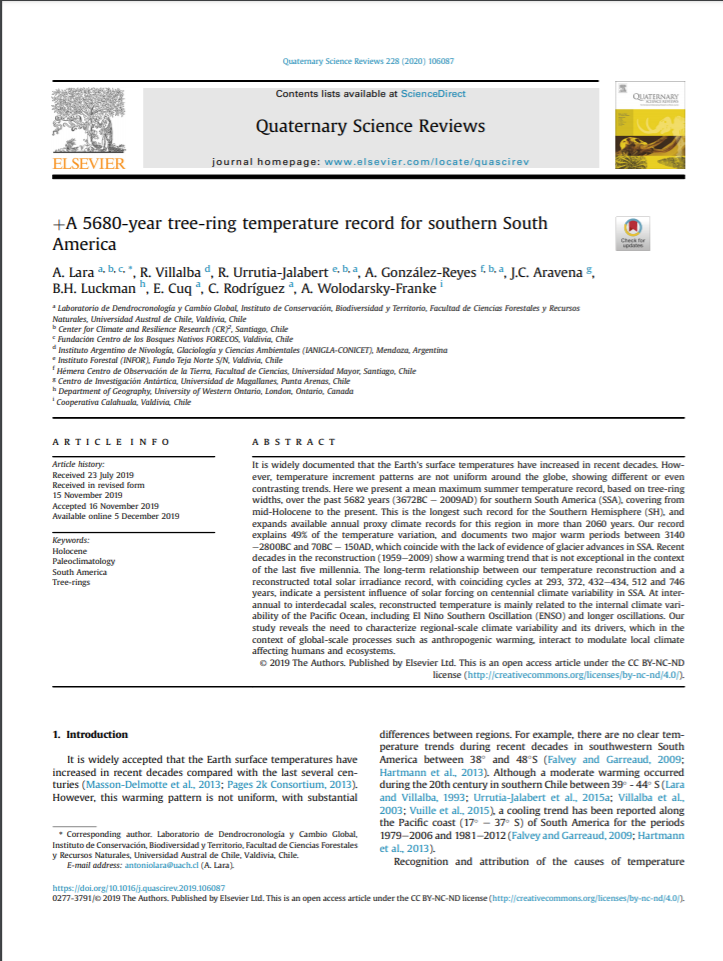 It is widely documented that the Earth's surface temperatures have increased in recent decades. However, temperature increment patterns are not uniform around the globe, showing different or even contrasting trends. Here we present a mean maximum summer temperature record, based on tree-ring widths, over the past 5682 years (3672BC - 2009AD) for southern South America (SSA), covering from mid-Holocene to the present. This is the longest such record for the Southern Hemisphere (SH), and expands available annual proxy climate records for this region in more than 2060 years. Our record explains 49% of the temperature variation, and documents two major warm periods between 3140 -2800BC and 70BC - 150AD, which coincide with the lack of evidence of glacier advances in SSA. Recent decades in the reconstruction (1959-2009) show a warming trend that is not exceptional in the context of the last five millennia. The long-term relationship between our temperature reconstruction and a reconstructed total solar irradiance record, with coinciding cycles at 293, 372, 432-434, 512 and 746 years, indicate a persistent influence of solar forcing on centennial climate variability in SSA. At inter-annual to interdecadal scales, reconstructed temperature is mainly related to the internal climate variability of the Pacific Ocean, including El Nino Southern Oscillation (ENSO) and longer oscillations. Our study reveals the need to characterize regional-scale climate variability and its drivers, which in the context of global-scale processes such as anthropogenic warming, interact to modulate local climate affecting humans and ecosystems. (C) 2019 The Authors. Published by Elsevier Ltd.