Analysis of Neur(o) Lexeme and its Derivatives in Anatomy Learning 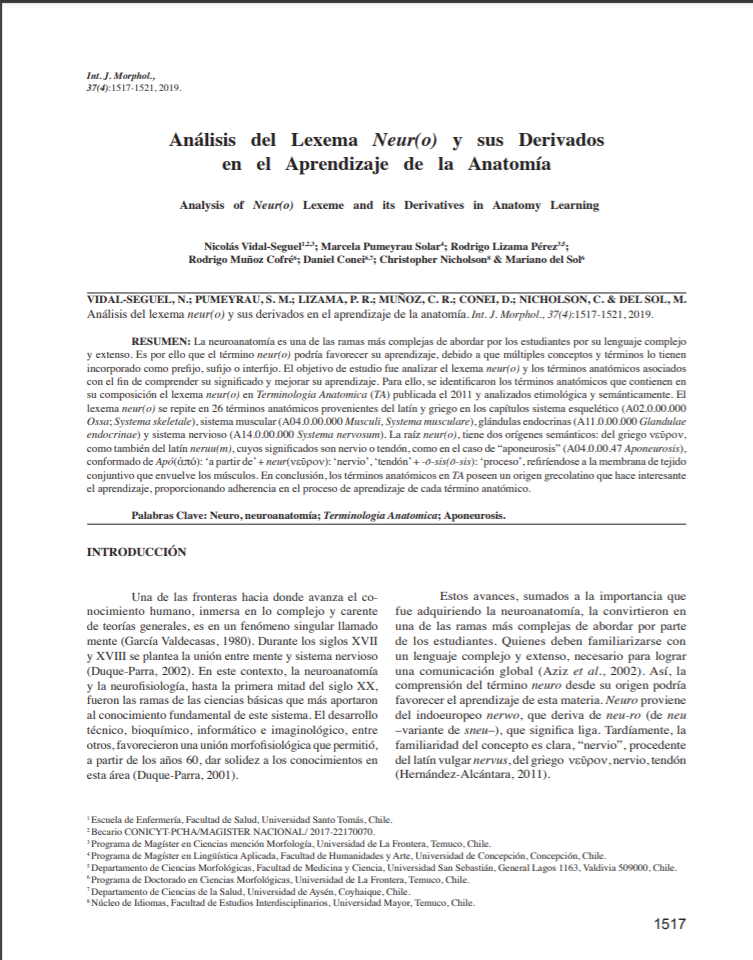 Neuroanatomy is one of the most complex areas addressed by students because of its complex and extensive language. That is why the term neuro could favor its learning, because multiple concepts and terms have it incorporated as a prefix, suffix or interfix. The aim of study was to analyze neur(o) lexeme and the associated anatomical terms in order to understand its meaning and improve its learning. For this, the anatomical terms that contain neur(o) lexema in Terminologia Anatomica (TA) published in 2011 and analyzed etymologically and semantically were identified in its composition. The neur(o) lexeme is repeated in 26 anatomical terms from latin and greek in the skeletal system (A02.0.00.000 Ossa; Systema skeletale), muscular system (A04.0.00.000 Musculi, Systema musculare), endocrine glands (A11.0.00.000 Glandulae endocrinae) and nervous system (A14.0.00.000 Systema nervosum) chapters. The neur(o) root has two semantic origins: from nu epsilon upsilon rho Omicron nu, as well as from latin neruu(m), whose meanings are nerve or tendon, as in the case of"aponeurosis"(A04.0.00.47 Aponeurosis), formed by Apo(alpha pi Omicron): 'from' + neur(nu epsilon nu rho Omicron nu): 'nerve', 'tendon' + -o-sis(o-sis): 'process', referring to the connective tissue membrane that surrounds the muscles. In conclusion, the anatomical terms in TA have a greek and latin origin that makes learning interesting, providing adherence in the learning process of each anatomical term.