Film Dressings Based on Hydrogels: Simultaneous and Sustained-Release of Bioactive Compounds with Wound Healing Properties 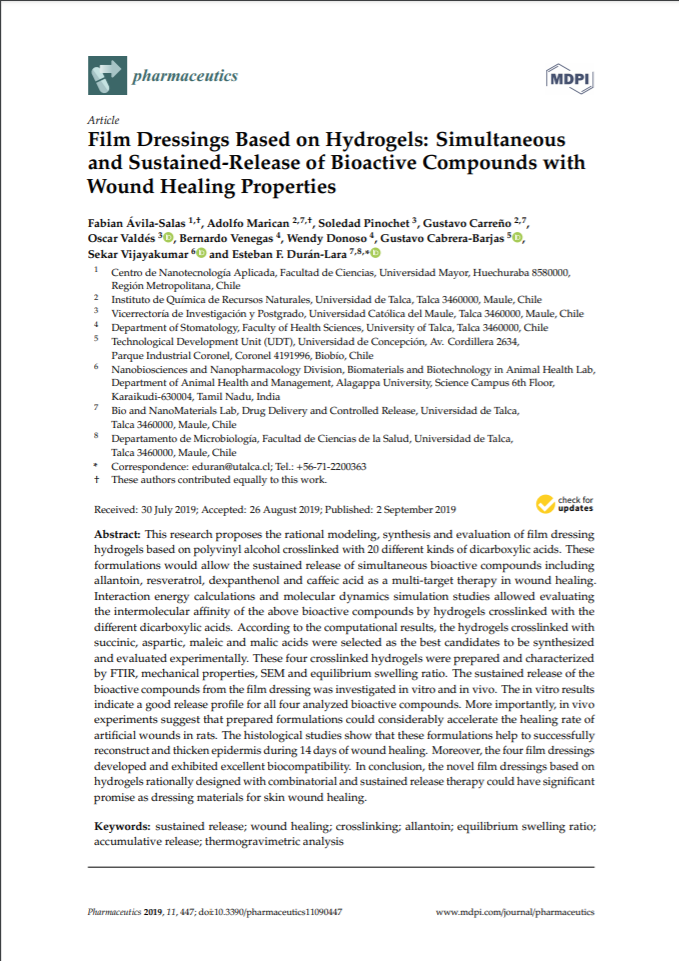 This research proposes the rational modeling, synthesis and evaluation of film dressing hydrogels based on polyvinyl alcohol crosslinked with 20 different kinds of dicarboxylic acids. These formulations would allow the sustained release of simultaneous bioactive compounds including allantoin, resveratrol, dexpanthenol and caffeic acid as a multi-target therapy in wound healing. Interaction energy calculations and molecular dynamics simulation studies allowed evaluating the intermolecular affinity of the above bioactive compounds by hydrogels crosslinked with the different dicarboxylic acids. According to the computational results, the hydrogels crosslinked with succinic, aspartic, maleic and malic acids were selected as the best candidates to be synthesized and evaluated experimentally. These four crosslinked hydrogels were prepared and characterized by FTIR, mechanical properties, SEM and equilibrium swelling ratio. The sustained release of the bioactive compounds from the film dressing was investigated in vitro and in vivo. The in vitro results indicate a good release profile for all four analyzed bioactive compounds. More importantly, in vivo experiments suggest that prepared formulations could considerably accelerate the healing rate of artificial wounds in rats. The histological studies show that these formulations help to successfully reconstruct and thicken epidermis during 14 days of wound healing. Moreover, the four film dressings developed and exhibited excellent biocompatibility. In conclusion, the novel film dressings based on hydrogels rationally designed with combinatorial and sustained release therapy could have significant promise as dressing materials for skin wound healing.