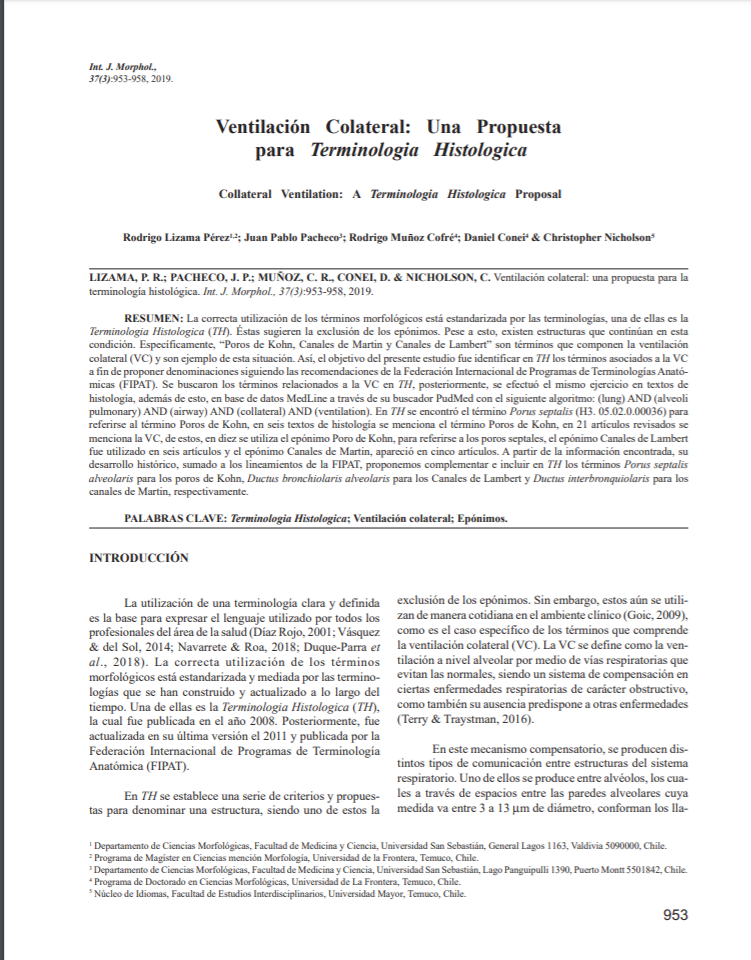 The correct use of morphological terms is standardized by the Terminologies, one of them is the Histological Terminology (HT) For these Terminologies, the exclusion of eponyms is recommended. Despite this, there are structures that remain as eponyms. Three in particular: Pores of Kohn, Martin Channels and Lambert Channels are terms that make up collateral ventilation (CV) and are an example of this. Thus, the objective of the present study was to identify in the HT the terms associated with the CV in order to propose denominations following the recommendations of the Federative International Programme on Anatomical Terminologies (FIPAT). The terms related to CV in the TH were researched, and subsequently, the same exercise was carried out in histology texts. The MedLine database was also used through its PudMed search engine with the following algorithm: (lung) AND (alveoli pulmonary) AND (airway) AND (collateral) AND (ventilation). In HT the term Porus Septalis"(H3.05.0.0.036) was found to refer to the term"Pores of Kohn, in six histology texts the term Pores of Kohn is mentioned, in 21 reviewed articles the CV is mentioned, of these, in ten the eponymous Pores of Kohn is used, to refer to the Septal Pores, the eponymous Lambert Channels was used in six articles and the eponymous Martin Channels appeared in five articles. From the information found, its historical development, added to the guidelines of the FIPAT, we propose complementing and including in the HT the terms"Porus septalis alveolaris"for pores of Kohn,"Ductus bronchiolaris alveolaris"for the Lambert Channels and"Ductus interbronquiolaris"for the Martin Channels, respectively.