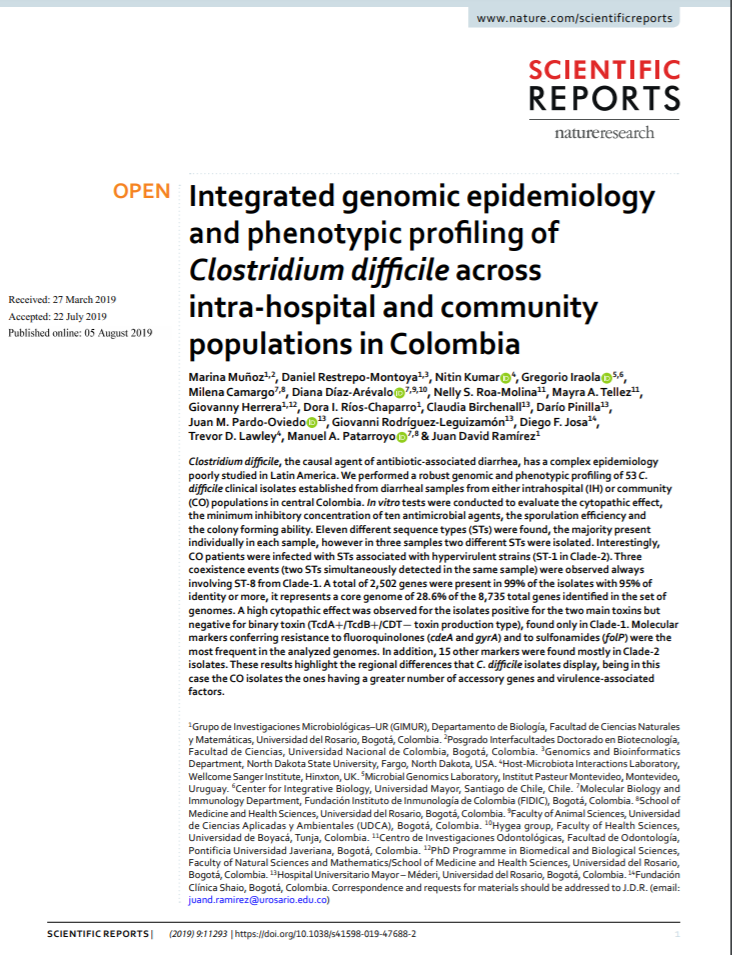 Clostridium difficile, the causal agent of antibiotic-associated diarrhea, has a complex epidemiology poorly studied in Latin America. We performed a robust genomic and phenotypic profiling of 53 C. difficile clinical isolates established from diarrheal samples from either intrahospital (IH) or community (CO) populations in central Colombia. In vitro tests were conducted to evaluate the cytopathic effect, the minimum inhibitory concentration of ten antimicrobial agents, the sporulation efficiency and the colony forming ability. Eleven different sequence types (STs) were found, the majority present individually in each sample, however in three samples two different STs were isolated. Interestingly, CO patients were infected with STs associated with hypervirulent strains (ST-1 in Clade-2). Three coexistence events (two STs simultaneously detected in the same sample) were observed always involving ST-8 from Clade-1. A total of 2,502 genes were present in 99% of the isolates with 95% of identity or more, it represents a core genome of 28.6% of the 8,735 total genes identified in the set of genomes. A high cytopathic effect was observed for the isolates positive for the two main toxins but negative for binary toxin (TcdA+/TcdB+/CDT-toxin production type), found only in Clade-1. Molecular markers conferring resistance to fluoroquinolones (cdeA and gyrA) and to sulfonamides (folP) were the most frequent in the analyzed genomes. In addition, 15 other markers were found mostly in Clade-2 isolates. These results highlight the regional differences that C. difficile isolates display, being in this case the CO isolates the ones having a greater number of accessory genes and virulence-associated factors.