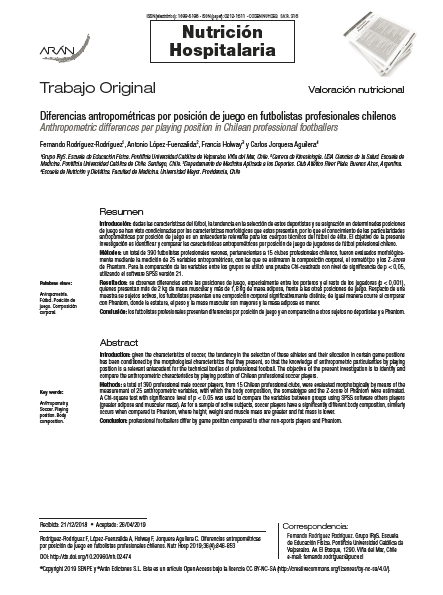 Introduction: given the characteristics of soccer, the tendency in the selection of these athletes and their allocation in certain game positions has been conditioned by the morphological characteristics that they present, so that the knowledge of anthropometric particularities by playing position is a relevant antecedent for the technical bodies of professional football. The objective of the present investigation is to identify and compare the anthropometric characteristics by playing position of Chilean professional soccer players. Methods: a total of 390 professional male soccer players, from 15 Chilean professional clubs, were evaluated morphologically by means of the measurement of 25 anthropometric variables, with which the body composition, the somatotype and the Z-score of Phantom were estimated. A Chi-square test with significance level of p < 0.05 was used to compare the variables between groups using SPSS software others players (greater adipose and muscular mass). As for a sample of active subjects, soccer players have a significantly different body composition, similarly occurs when compared to Phantom, where height, weight and muscle mass are greater and fat mass is lower. Conclusion: professional footballers differ by game position compared to other non-sports players and Phantom.