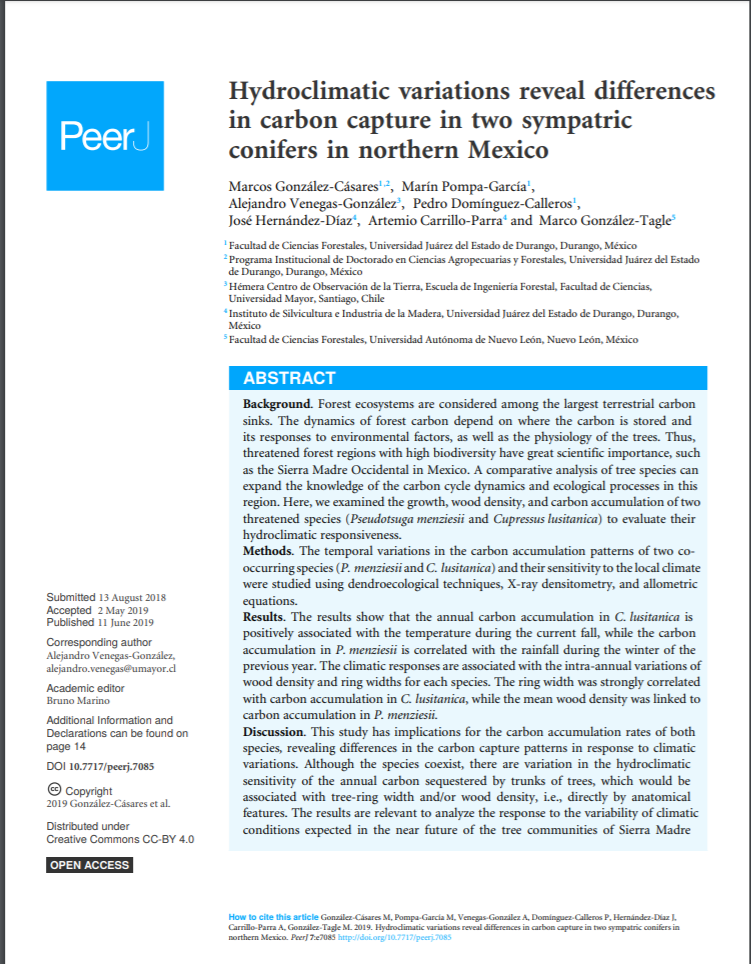 Background. Forest ecosystems are considered among the largest terrestrial carbon sinks. The dynamics of forest carbon depend on where the carbon is stored and its responses to environmental factors, as well as the physiology of the trees. Thus, threatened forest regions with high biodiversity have great scientific importance, such as the Sierra Madre Occidental in Mexico. A comparative analysis of tree species can expand the knowledge of the carbon cycle dynamics and ecological processes in this region. Here, we examined the growth, wood density, and carbon accumulation of two threatened species (Pseudotsuga menziesii and Cupressus lusitanica) to evaluate their hydroclimatic responsiveness. Methods. The temporal variations in the carbon accumulation patterns of two cooccurring species (P. menziesii and C. lusitanica) and their sensitivity to the local climate were studied using dendroecological techniques, X-ray densitometry, and allometric equations. Results. The results show that the annual carbon accumulation in C. lusitanica is positively associated with the temperature during the current fall, while the carbon accumulation in P. menziesii is correlated with the rainfall during the winter of the previous year. The climatic responses are associated with the intra-annual variations of wood density and ring widths for each species. The ring width was strongly correlated with carbon accumulation in C. lusitanica, while the mean wood density was linked to carbon accumulation in P. menziesii. Discussion. This study has implications for the carbon accumulation rates of both species, revealing differences in the carbon capture patterns in response to climatic variations. Although the species coexist, there are variation in the hydroclimatic sensitivity of the annual carbon sequestered by trunks of trees, which would be associated with tree-ring width and/or wood density, i.e., directly by anatomical features. The results are relevant to analyze the response to the variability of climatic conditions expected in the near future of the tree communities of Sierra Madre Occidental. Therefore, this study provides a basis for modeling the long-term carbon budget projections in terrestrial ecosystems in northern Mexico.