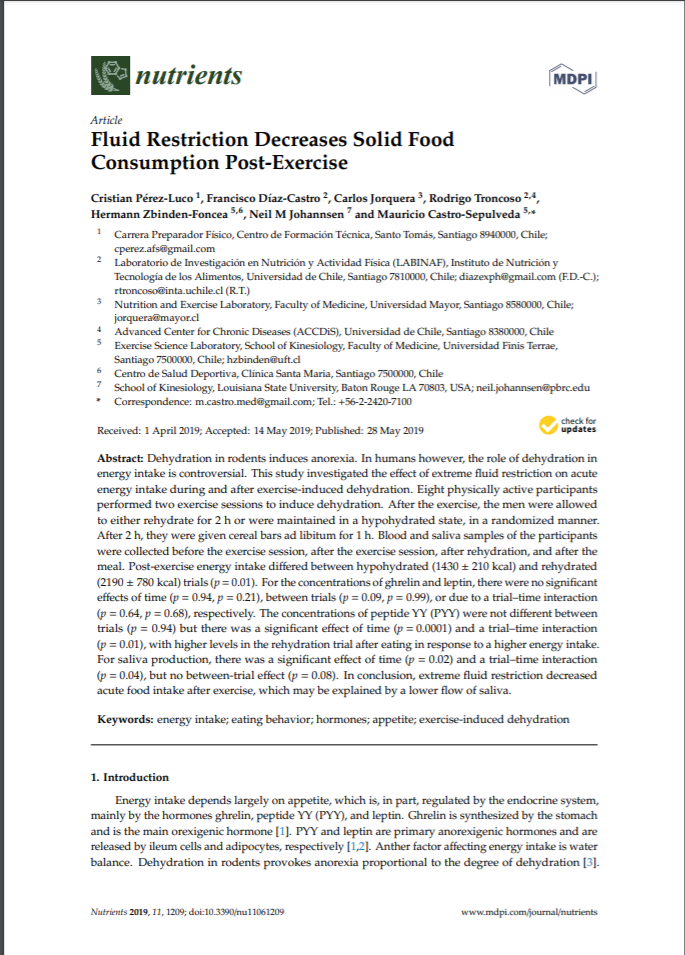 Dehydration in rodents induces anorexia. In humans however, the role of dehydration in energy intake is controversial. This study investigated the effect of extreme fluid restriction on acute energy intake during and after exercise-induced dehydration. Eight physically active participants performed two exercise sessions to induce dehydration. After the exercise, the men were allowed to either rehydrate for 2 h or were maintained in a hypohydrated state, in a randomized manner. After 2 h, they were given cereal bars ad libitum for 1 h. Blood and saliva samples of the participants were collected before the exercise session, after the exercise session, after rehydration, and after the meal. Post-exercise energy intake differed between hypohydrated (1430 +/- 210 kcal) and rehydrated (2190 +/- 780 kcal) trials (p = 0.01). For the concentrations of ghrelin and leptin, there were no significant effects of time (p = 0.94, p = 0.21), between trials (p = 0.09, p = 0.99), or due to a trial-time interaction (p = 0.64, p = 0.68), respectively. The concentrations of peptide YY (PYY) were not different between trials (p = 0.94) but there was a significant effect of time (p = 0.0001) and a trial-time interaction (p = 0.01), with higher levels in the rehydration trial after eating in response to a higher energy intake. For saliva production, there was a significant effect of time (p = 0.02) and a trial-time interaction (p = 0.04), but no between-trial effect (p = 0.08). In conclusion, extreme fluid restriction decreased acute food intake after exercise, which may be explained by a lower flow of saliva.