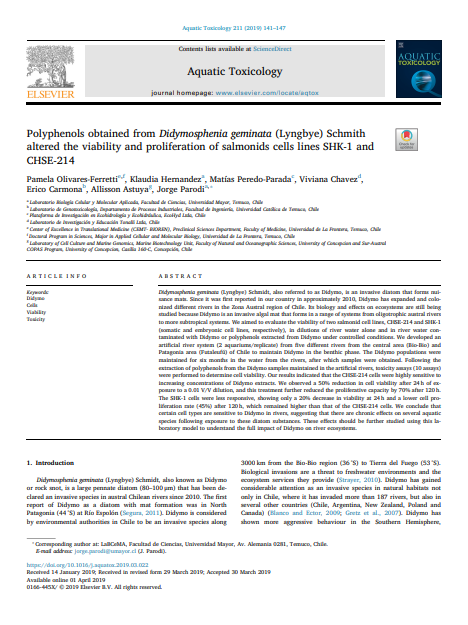 Didymosphenia geminata (Lyngbye) Schmidt, also referred to as Didymo, is an invasive diatom that forms nuisance mats. Since it was first reported in our country in approximately 2010, Didymo has expanded and colonized different rivers in the Zona Austral region of Chile. Its biology and effects on ecosystems are still being studied because Didymo is an invasive algal mat that forms in a range of systems from oligotrophic austral rivers to more subtropical systems. We aimed to evaluate the viability of two salmonid cell lines, CHSE-214 and SHK-1 (somatic and embryonic cell lines, respectively), in dilutions of river water alone and in river water contaminated with Didymo or polyphenols extracted from Didymo under controlled conditions. We developed an artificial river system (2 aquariums/replicate) from five different rivers from the central area (Bio-Bio) and Patagonia area (Futaleufu) of Chile to maintain Didymo in the benthic phase. The Didymo populations were maintained for six months in the water from the rivers, after which samples were obtained. Following the extraction of polyphenols from the Didymo samples maintained in the artificial rivers, toxicity assays (10 assays) were performed to determine cell viability. Our results indicated that the CHSE-214 cells were highly sensitive to increasing concentrations of Didymo extracts. We observed a 50% reduction in cell viability after 24 h of exposure to a 0.01 V/V dilution, and this treatment further reduced the proliferative capacity by 70% after 120 h. The SHK-1 cells were less responsive, showing only a 20% decrease in viability at 24 h and a lower cell proliferation rate (45%) after 120 h, which remained higher than that of the CHSE-214 cells. We conclude that certain cell types are sensitive to Didymo in rivers, suggesting that there are chronic effects on several aquatic species following exposure to these diatom substances. These effects should be further studied using this laboratory model to understand the full impact of Didymo on river ecosystems.