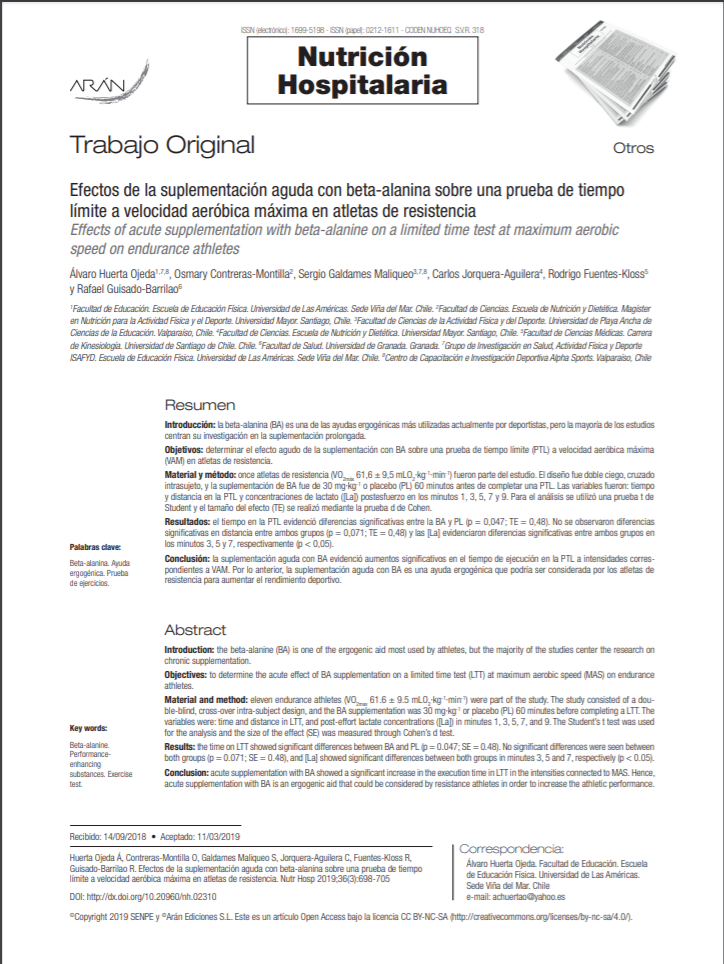 Introduction: the beta-alanine (BA) is one of the ergogenic aid most used by athletes, but the majority of the studies center the research on chronic supplementation. Objectives: to determine the acute effect of BA supplementation on a limited time test (LTT) at maximum aerobic speed (MAS) on endurance athletes. Material and method: eleven endurance athletes (VO2max 61.6 +/- 9.5 mLO(2).kg(-1).min(-1)) were part of the study. The study consisted of a double-blind, cross-over intra-subject design, and the BA supplementation was 30 mg.kg(-1) or placebo (PL) 60 minutes before completing a LTT. The variables were: time and distance in LTT, and post-effort lactate concentrations ([La]) in minutes 1, 3, 5, 7, and 9. The Student's t test was used for the analysis and the size of the effect (SE) was measured through Cohen's d test. Results: the time on LTT showed significant differences between BA and PL (p = 0.047; SE = 0.48). No significant differences were seen between both groups (p = 0.071; SE = 0.48), and [La] showed significant differences between both groups in minutes 3, 5 and 7, respectively (p < 0.05). Conclusion: acute supplementation with BA showed a significant increase in the execution time in LTT in the intensities connected to MAS. Hence, acute supplementation with BA is an ergogenic aid that could be considered by resistance athletes in order to increase the athletic performance.