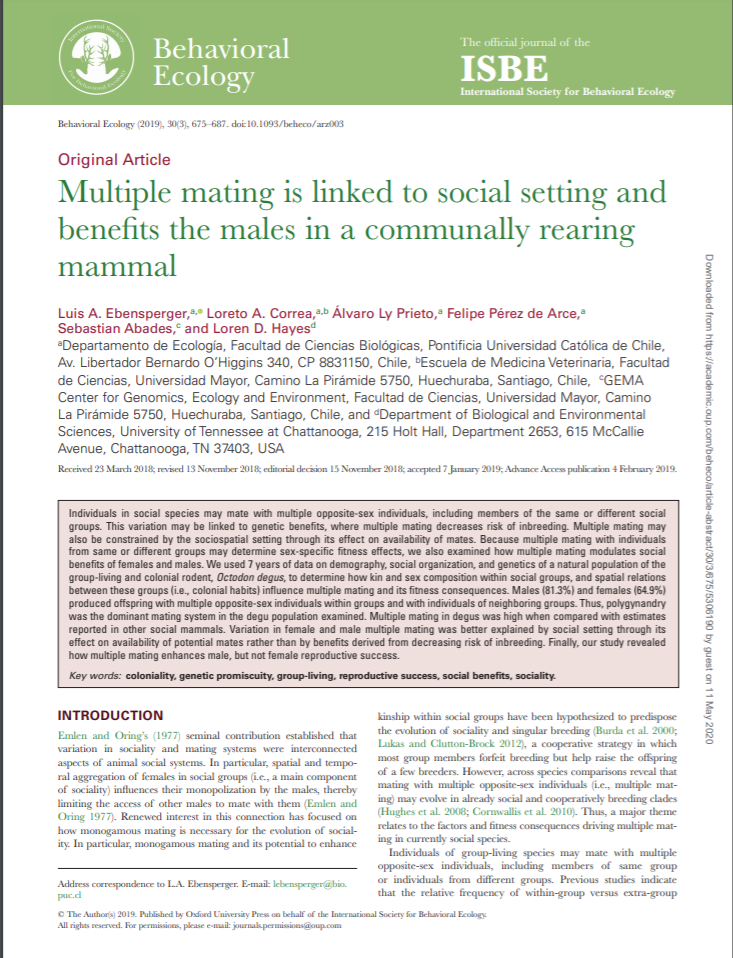 Individuals in social species may mate with multiple opposite-sex individuals, including members of the same or different social groups. This variation may be linked to genetic benefits, where multiple mating decreases risk of inbreeding. Multiple mating may also be constrained by the sociospatial setting through its effect on availability of mates. Because multiple mating with individuals from same or different groups may determine sex-specific fitness effects, we also examined how multiple mating modulates social benefits of females and males. We used 7 years of data on demography, social organization, and genetics of a natural population of the group-living and colonial rodent, Octodon degus, to determine how kin and sex composition within social groups, and spatial relations between these groups (i.e., colonial habits) influence multiple mating and its fitness consequences. Males (81.3%) and females (64.9%) produced offspring with multiple opposite-sex individuals within groups and with individuals of neighboring groups. Thus, polygynandry was the dominant mating system in the degu population examined. Multiple mating in degus was high when compared with estimates reported in other social mammals. Variation in female and male multiple mating was better explained by social setting through its effect on availability of potential mates rather than by benefits derived from decreasing risk of inbreeding. Finally, our study revealed how multiple mating enhances male, but not female reproductive success. Social animals may mate with multiple opposite-sex individuals, including members of same or different social groups. We used live-trapping, telemetry, and genetic tools to quantify the social and breeding behavior of female and male degus. Both males and females mate multiply based on opportunities within their own groups and in neighboring groups. As a result, males (but not females) mating multiply produces more offspring. Thus, benefits of multiple mating are sex specific in degus.