Computational Characterization of the mtORF of Pocilloporid Corals: Insights into Protein Structure and Function in Stylophora Lineages from Contrasting Environments 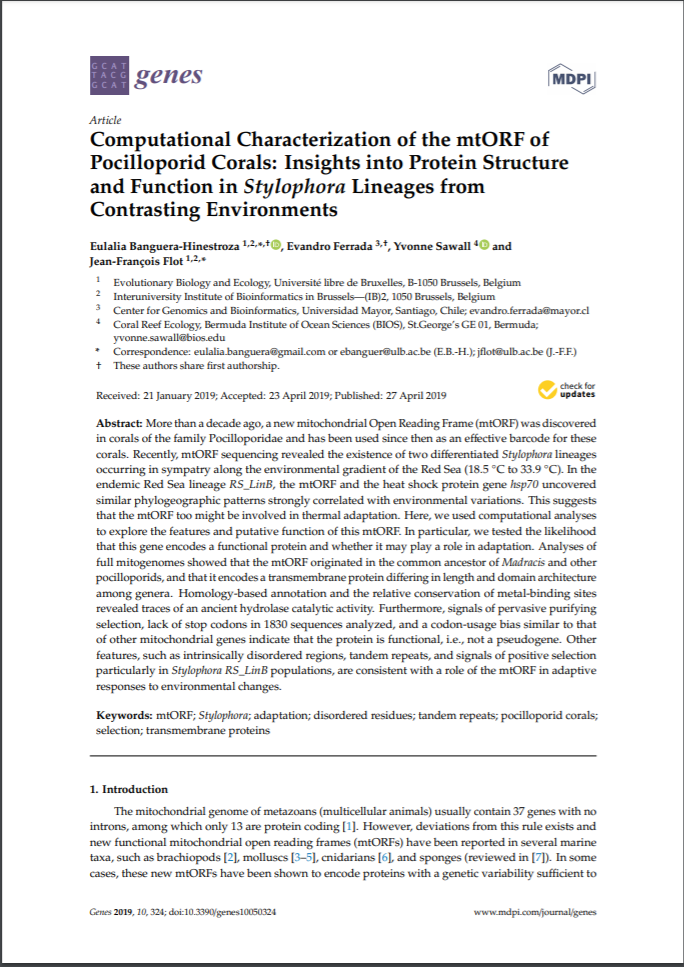 More than a decade ago, a new mitochondrial Open Reading Frame (mtORF) was discovered in corals of the family Pocilloporidae and has been used since then as an effective barcode for these corals. Recently, mtORF sequencing revealed the existence of two differentiated Stylophora lineages occurring in sympatry along the environmental gradient of the Red Sea (18.5 degrees C to 33.9 degrees C). In the endemic Red Sea lineage RS_LinB, the mtORF and the heat shock protein gene hsp70 uncovered similar phylogeographic patterns strongly correlated with environmental variations. This suggests that the mtORF too might be involved in thermal adaptation. Here, we used computational analyses to explore the features and putative function of this mtORF. In particular, we tested the likelihood that this gene encodes a functional protein and whether it may play a role in adaptation. Analyses of full mitogenomes showed that the mtORF originated in the common ancestor of Madracis and other pocilloporids, and that it encodes a transmembrane protein differing in length and domain architecture among genera. Homology-based annotation and the relative conservation of metal-binding sites revealed traces of an ancient hydrolase catalytic activity. Furthermore, signals of pervasive purifying selection, lack of stop codons in 1830 sequences analyzed, and a codon-usage bias similar to that of other mitochondrial genes indicate that the protein is functional, i.e., not a pseudogene. Other features, such as intrinsically disordered regions, tandem repeats, and signals of positive selection particularly in Stylophora RS_LinB populations, are consistent with a role of the mtORF in adaptive responses to environmental changes.