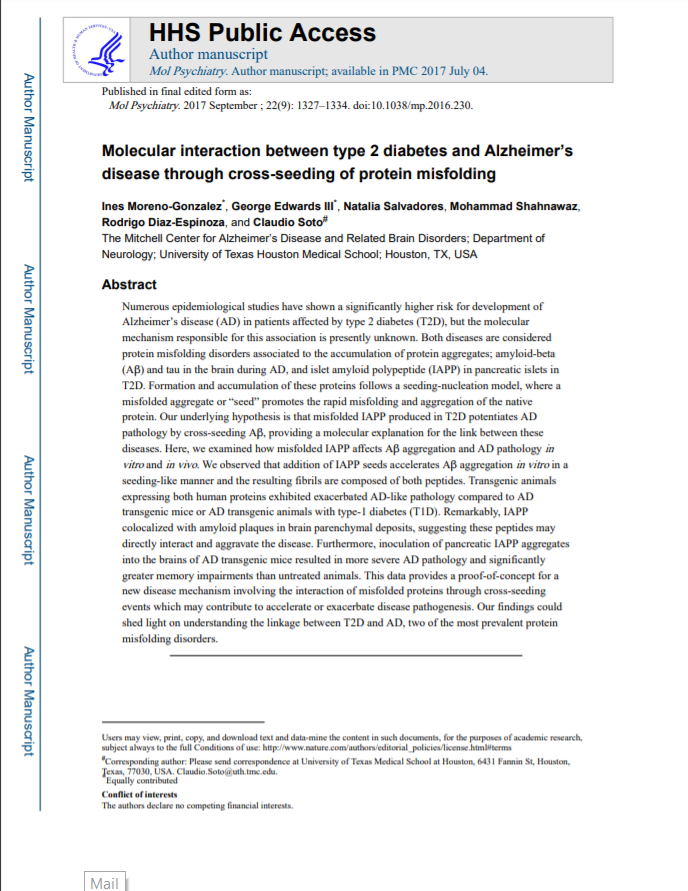 Numerous epidemiological studies have shown a significantly higher risk for development of Alzheimer's disease (AD) in patients affected by type 2 diabetes (T2D), but the molecular mechanism responsible for this association is presently unknown. Both diseases are considered protein misfolding disorders associated with the accumulation of protein aggregates; amyloid-beta (A beta) and tau in the brain during AD, and islet amyloid polypeptide (IAPP) in pancreatic islets in T2D. Formation and accumulation of these proteins follows a seeding-nucleation model, where a misfolded aggregate or 'seed' promotes the rapid misfolding and aggregation of the native protein. Our underlying hypothesis is that misfolded IAPP produced in T2D potentiates AD pathology by cross-seeding A beta, providing a molecular explanation for the link between these diseases. Here, we examined how misfolded IAPP affects A beta aggregation and AD pathology in vitro and in vivo. We observed that addition of IAPP seeds accelerates A beta aggregation in vitro in a seeding-like manner and the resulting fibrils are composed of both peptides. Transgenic animals expressing both human proteins exhibited exacerbated AD-like pathology compared with AD transgenic mice or AD transgenic animals with type 1 diabetes (T1D). Remarkably, IAPP colocalized with amyloid plaques in brain parenchymal deposits, suggesting that these peptides may directly interact and aggravate the disease. Furthermore, inoculation of pancreatic IAPP aggregates into the brains of AD transgenic mice resulted in more severe AD pathology and significantly greater memory impairments than untreated animals. These data provide a proof-of-concept for a new disease mechanism involving the interaction of misfolded proteins through cross-seeding events which may contribute to accelerate or exacerbate disease pathogenesis. Our findings could shed light on understanding the linkage between T2D and AD, two of the most prevalent protein misfolding disorders.