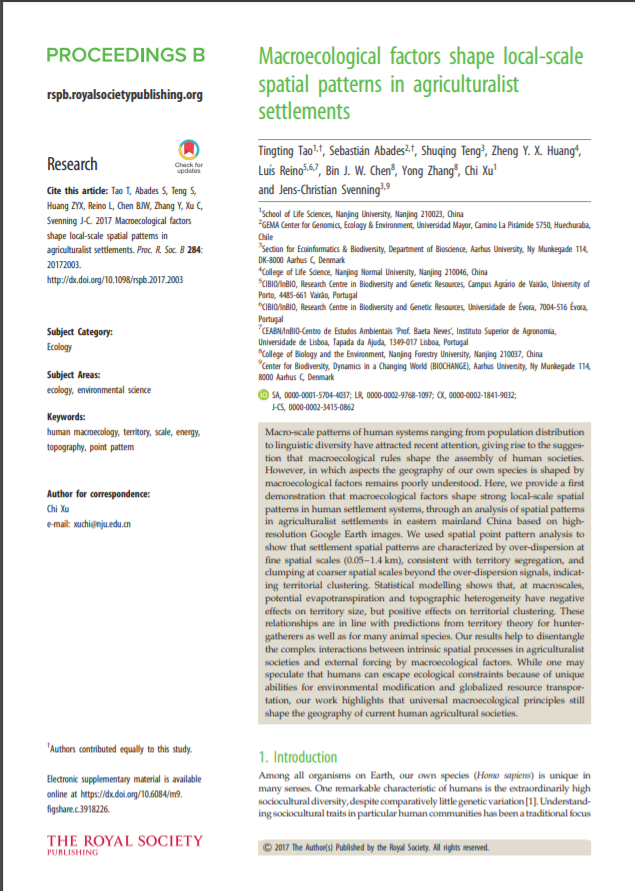 Macro-scale patterns of human systems ranging from population distribution to linguistic diversity have attracted recent attention, giving rise to the suggestion that macroecological rules shape the assembly of human societies. However, in which aspects the geography of our own species is shaped by macroecological factors remains poorly understood. Here, we provide a first demonstration that macroecological factors shape strong local-scale spatial patterns in human settlement systems, through an analysis of spatial patterns in agriculturalist settlements in eastern mainland China based on high-resolution Google Earth images. We used spatial point pattern analysis to show that settlement spatial patterns are characterized by over-dispersion at fine spatial scales (0.05-1.4 km), consistent with territory segregation, and clumping at coarser spatial scales beyond the over-dispersion signals, indicating territorial clustering. Statistical modelling shows that, at macroscales, potential evapotranspiration and topographic heterogeneity have negative effects on territory size, but positive effects on territorial clustering. These relationships are in line with predictions from territory theory for hunter-gatherers as well as for many animal species. Our results help to disentangle the complex interactions between intrinsic spatial processes in agriculturalist societies and external forcing by macroecological factors. While one may speculate that humans can escape ecological constraints because of unique abilities for environmental modification and globalized resource transportation, our work highlights that universal macroecological principles still shape the geography of current human agricultural societies.