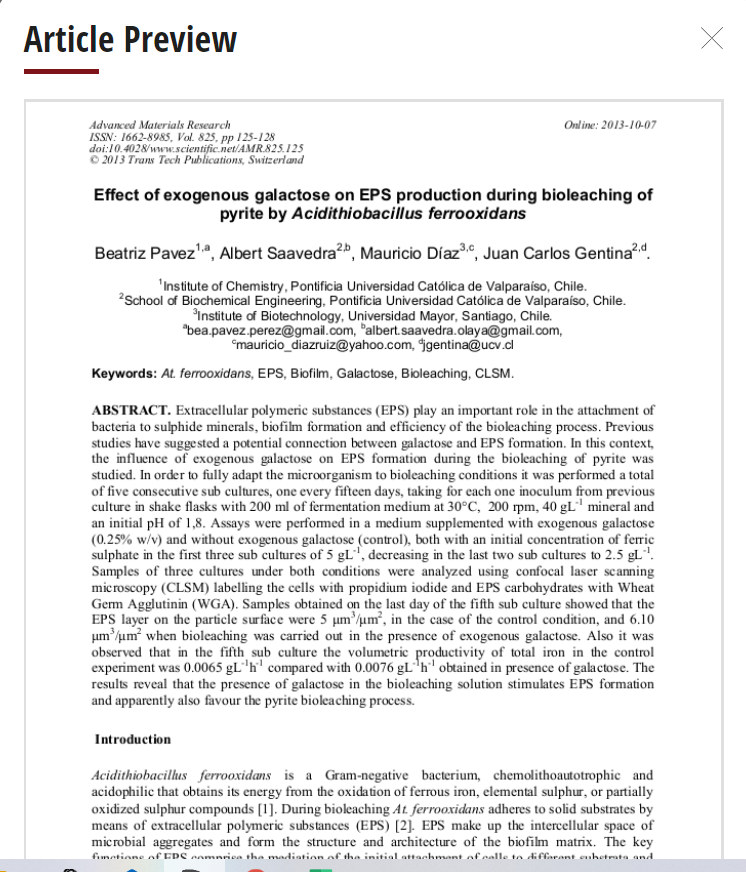 Extracellular polymeric substances (EPS) play an important role in the attachment of bacteria to sulphide minerals, biofilm formation and efficiency of the bioleaching process. Previous studies have suggested a potential connection between galactose and EPS formation. In this context, the influence of exogenous galactose on EPS formation during the bioleaching of pyrite was studied. In order to fully adapt the microorganism to bioleaching conditions it was performed a total of five consecutive sub cultures, one every fifteen days, taking for each one inocula from previous culture in shake flasks with 200 ml of fermentation medium at 30°C, 200 rpm, 40 gL-1 mineral and an initial pH of 1,8. Assays were performed in a medium supplemented with exogenous galactose (0.25% w/v) and without exogenous galactose (control), both with an initial concentration of ferric sulphate in the first three sub cultures of 5 gL-1, decreasing in the last two sub cultures to 2.5 gL-1. Samples of three cultures in both conditions were analyzed using confocal laser scanning microscopy (CLSM) labelling the cells with propidium iodide and EPS carbohydrates with Wheat Germ Agglutinin (WGA). Samples obtained on the last day of the fifth culture showed that the EPS layer on the particle surface was 5.00 μm3/μm2 in the case of the control condition and 6.10 μm3/μm2 when bioleaching was carried out in the presence of exogenous galactose. Also it was observed that in the fifth sub culture the volumetric productivity of total iron in the control experiment was 0.0065 gL-1.h-1 compared with 0.0076 gL-1.h-1 obtained in presence of galactose. The results reveal that the presence of galactose in the bioleaching solution stimulates EPS's formation and apparently also favour the pyrite bioleaching process.