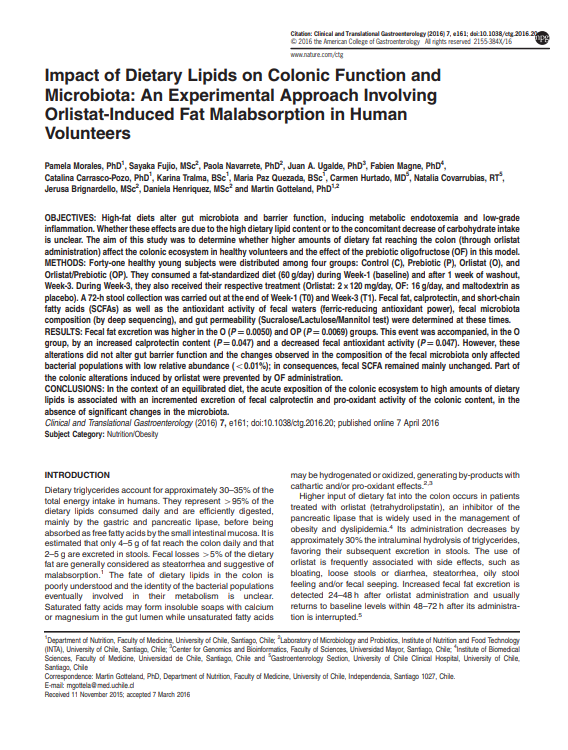 OBJECTIVES: High-fat diets alter gut microbiota and barrier function, inducing metabolic endotoxemia and low-grade inflammation. Whether these effects are due to the high dietary lipid content or to the concomitant decrease of carbohydrate intake is unclear. The aim of this study was to determine whether higher amounts of dietary fat reaching the colon (through orlistat administration) affect the colonic ecosystem in healthy volunteers and the effect of the prebiotic oligofructose (OF) in this model. METHODS: Forty-one healthy young subjects were distributed among four groups: Control (C), Prebiotic (P), Orlistat (O), and Orlistat/Prebiotic (OP). They consumed a fat-standardized diet (60 g/day) during Week-1 (baseline) and after 1 week of washout, Week-3. During Week-3, they also received their respective treatment (Orlistat: 2 × 120 mg/day, OF: 16 g/day, and maltodextrin as placebo). A 72-h stool collection was carried out at the end of Week-1 (T0) and Week-3 (T1). Fecal fat, calprotectin, and short-chain fatty acids (SCFAs) as well as the antioxidant activity of fecal waters (ferric-reducing antioxidant power), fecal microbiota composition (by deep sequencing), and gut permeability (Sucralose/Lactulose/Mannitol test) were determined at these times. RESULTS: Fecal fat excretion was higher in the O (P=0.0050) and OP (P=0.0069) groups. This event was accompanied, in the O group, by an increased calprotectin content (P=0.047) and a decreased fecal antioxidant activity (P=0.047). However, these alterations did not alter gut barrier function and the changes observed in the composition of the fecal microbiota only affected bacterial populations with low relative abundance (<0.01%); in consequences, fecal SCFA remained mainly unchanged. Part of the colonic alterations induced by orlistat were prevented by OF administration. CONCLUSIONS: In the context of an equilibrated diet, the acute exposition of the colonic ecosystem to high amounts of dietary lipids is associated with an incremented excretion of fecal calprotectin and pro-oxidant activity of the colonic content, in the absence of significant changes in the microbiota.