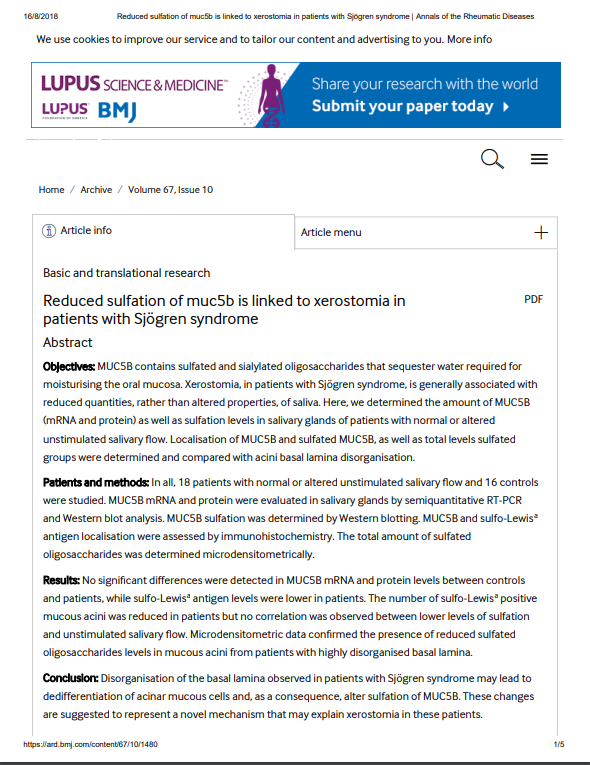 Objectives: MUC5B contains sulfated and sialylated oligosaccharides that sequester water required for moisturising the oral mucosa. Xerostomia, in patients with Sjogren syndrome, is generally associated with reduced quantities, rather than altered properties, of saliva. Here, we determined the amount of MUC5B (mRNA and protein) as well as sulfation levels in salivary glands of patients with normal or altered unstimulated salivary flow. Localisation of MUC5B and ulfated MUC5B, as well as total levels sulfated groups were determined and compared with acini basal lamina disorganisation. Patients and methods: In all, 18 patients with normal or altered unstimulated salivary flow and 16 controls were studied. MUC5B mRNA and protein were evaluated in salivary glands by semiquantitative RT-PCR and Western blot analysis. MUC5B sulfation was determined by Western blotting. MUC5B and sulfo-Lewis(a) antigen localisation were assessed by immunohistochemistry. The total amount of sulfated oligosaccharides was determined microdensitometrically. Results: No significant differences were detected in MUC5B mRNA and protein levels between controls and patients, while sulfo-Lewis(a) antigen levels were lower in patients. The number of sulfo-Lewis(a) positive mucous acini was reduced in patients but no correlation was observed between lower levels of sulfation and unstimulated salivary flow. Microdensitometric data confirmed the presence of reduced sulfated oligosaccharides levels in mucous acini from patients with highly disorganised basal lamina. Conclusion: Disorganisation of the basal lamina observed in patients with Sjogren syndrome may lead to dedifferentiation of acinar mucous cells and, as a consequence, alter sulfation of MUC5B. These changes are suggested to represent a novel mechanism that may explain xerostomia in these patients