Gene expression and chromosomal location for susceptibility to Sjogren's syndrome 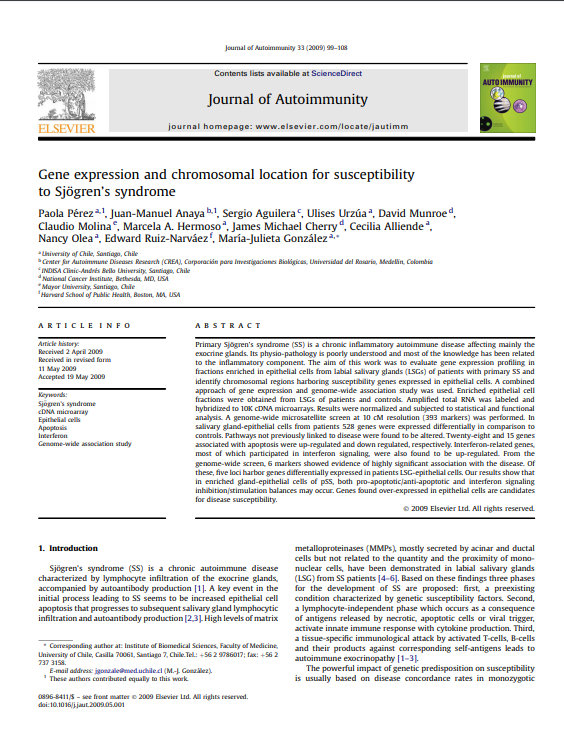 Primary Sjögren's syndrome (SS) is a chronic inflammatory autoimmune disease affecting mainly the exocrine glands. Its physio-pathology is poorly understood and most of the knowledge has been related to the inflammatory component. The aim of this work was to evaluate gene expression profiling in fractions enriched in epithelial cells from labial salivary glands (LSGs) of patients with primary SS and identify chromosomal regions harboring susceptibility genes expressed in epithelial cells. A combined approach of gene expression and genome-wide association study was used. Enriched epithelial cell fractions were obtained from LSGs of patients and controls. Amplified total RNA was labeled and hybridized to 10K cDNA microarrays. Results were normalized and subjected to statistical and functional analysis. A genome-wide microsatellite screen at 10 cM resolution (393 markers) was performed. In salivary gland-epithelial cells from patients 528 genes were expressed differentially in comparison to controls. Pathways not previously linked to disease were found to be altered. Twenty-eight and 15 genes associated with apoptosis were up-regulated and down regulated, respectively. Interferon-related genes, most of which participated in interferon signaling, were also found to be up-regulated. From the genome-wide screen, 6 markers showed evidence of highly significant association with the disease. Of these, five loci harbor genes differentially expressed in patients LSG-epithelial cells. Our results show that in enriched gland-epithelial cells of pSS, both pro-apoptotic/anti-apoptotic and interferon signaling inhibition/stimulation balances may occur. Genes found over-expressed in epithelial cells are candidates for disease susceptibility.